2. Views of how officials, public have responded to COVID-19 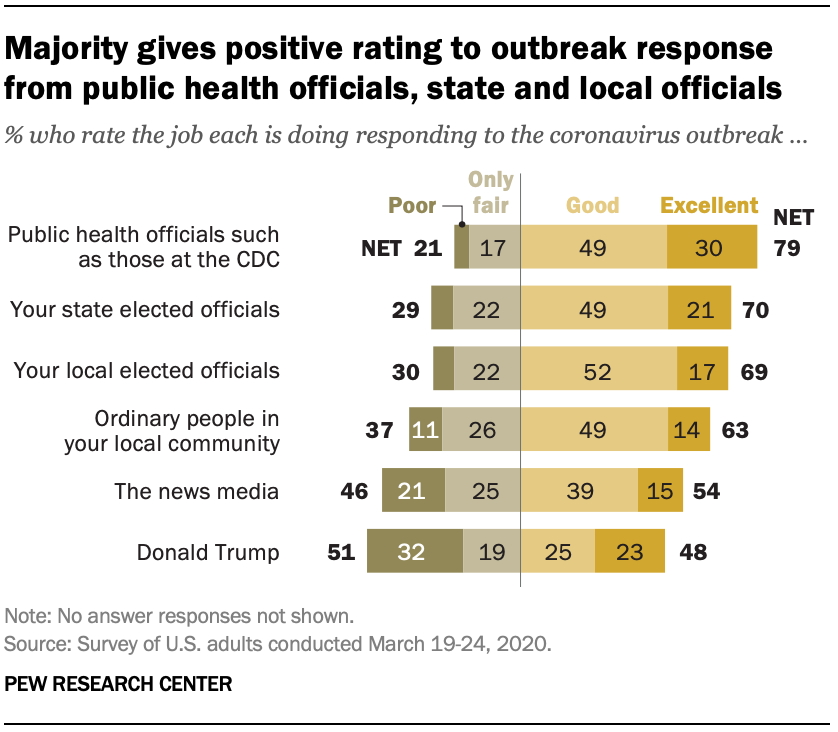 Most Americans say several key actors in the country’s response to the coronavirus outbreak – especially public health officials and those serving in state and local elected offices – are doing a good or excellent job. Nearly eight in ten U.S. adults (79%) say public health officials (such as those at the CDC) have done an excellent or good job in their response to the outbreak, including 30% who say their response has been excellent. Clear majorities of Americans also say their state elected officials (70%), local elected officials (69%) and ordinary people in their local community (63%) are doing a good or excellent job responding to COVID-19.

Just over half of Americans (54%) rate the news media’s response to the outbreak positively, while 46% rate it negatively.

The public is about evenly split in their views of how Donald Trump is responding to the outbreak, with 48% saying he has done a good or excellent job and 51% saying his response has been only fair or poor. 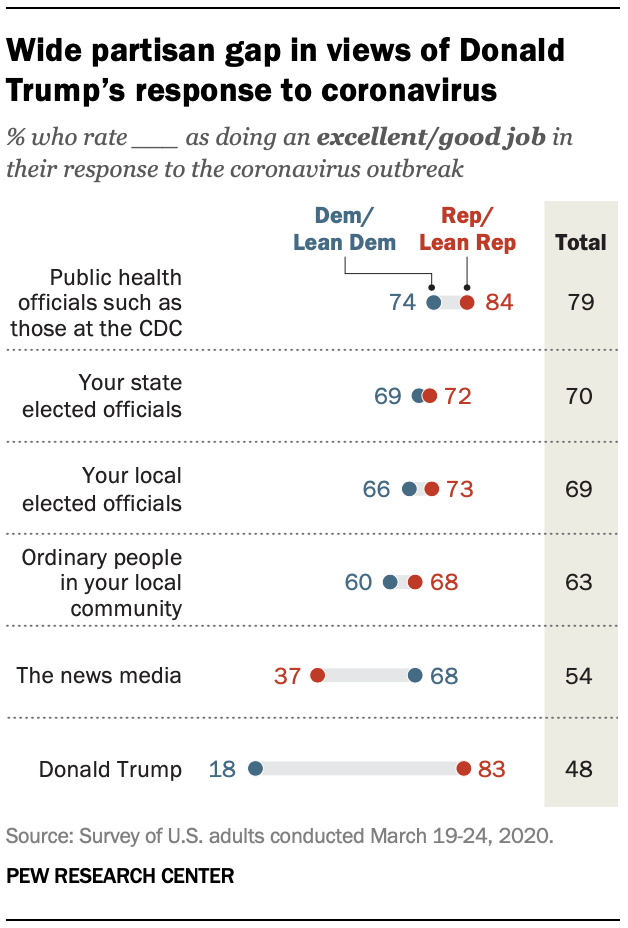 There’s also a wide partisan gap in perceptions of how the news media have done responding to the coronavirus outbreak. Most Democrats (68%) say they have done an excellent or good job. By contrast, just 37% of Republicans rate their performance positively.

Partisan views about other key actors in the country’s response to coronavirus are more closely aligned.

About two-thirds of Republicans (68%) and six-in-ten Democrats (60%) say ordinary people in their community are doing an excellent or good job in response to the coronavirus outbreak, and 73% of Republicans and 66% of Democrats rate the performance of their local elected officials positively.

Americans’ views of the way Donald Trump is handling his job as president have improved since January; 45% now approve of the president’s job performance while 52% disapprove.

The share approving of Trump is up 5 percentage points since January and is at the highest level recorded in a Pew Research Center survey since March 2017, when 44% of Americans said they approved of the president’s job performance.

For the most part, broad demographic differences in views of Trump’s job performance are unchanged. Trump continues to be viewed much more positively by older people, those without a bachelor’s degree and white Americans than among younger people, those with a college degree or more education and among black and Hispanic Americans.

While men remain somewhat more likely than women to approve of Trump, the gender gap has narrowed. Men’s views of Trump’s performance are only slightly more positive than in January (48% today, 44% then), while Trump’s approval rating among women has improved by 6 percentage points since then (43% today, 37% in January).

The public is confident that members of their own household are responding appropriately to the coronavirus outbreak, but they are more critical of others in their community and people around the county. 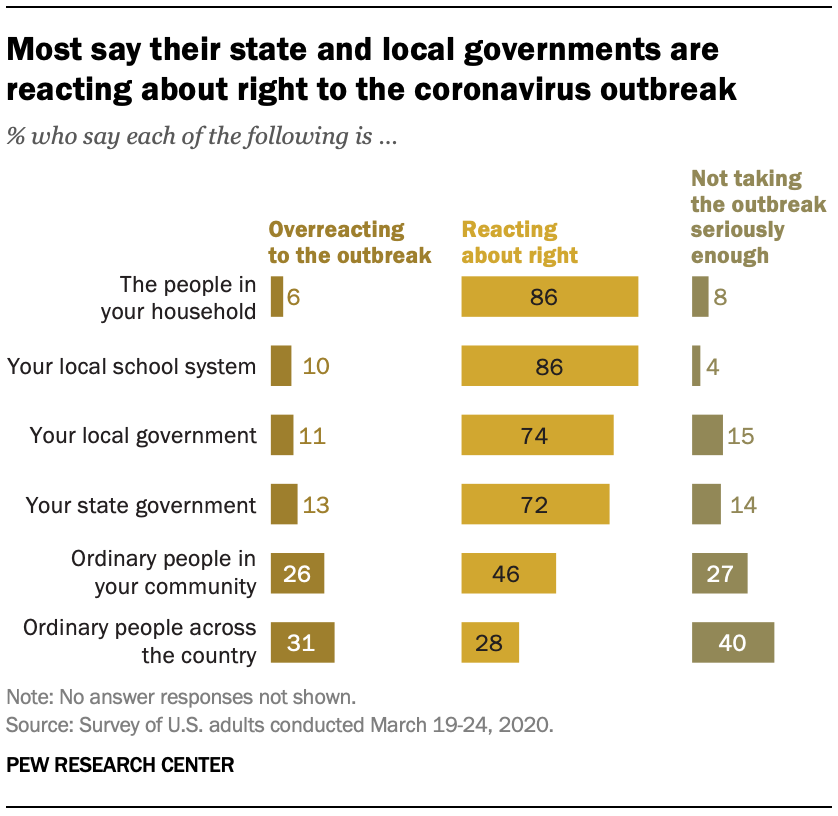 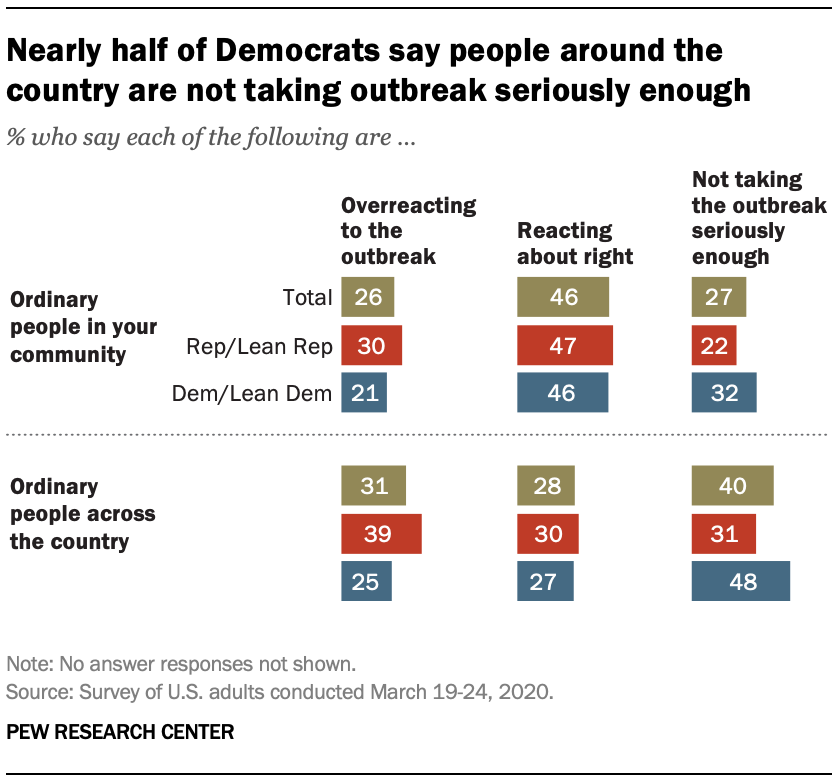 Republicans and Democrats offer somewhat different critiques of how institutions and people in the country are responding to the coronavirus outbreak. Among those who don’t think the response has been appropriate, Democrats tend to be more likely to say actors aren’t taking the outbreak seriously enough, while Republicans are more inclined to say they are overreacting.

This pattern is even more pronounced in how partisans assess the reactions of ordinary people across the country. About half of Democrats (48%) say that people across the country are underreacting to the outbreak, compared with 27% who say they’re reacting about right and 25% who say they are overreacting. By contrast, a plurality of Republicans (39%) say people around the country are overreacting to the outbreak; somewhat fewer say they are either responding about right (30%) or not taking it seriously enough (31%).

Republicans in states with a higher number of confirmed COVID-19 cases are less likely than Republicans in states with fewer cases to say people across the country are overreacting to the outbreak (33% vs. 42%). Still, Republicans living in the hardest-hit states remain more likely than even Democrats in the least hard-hit states to say the public is overreacting to the outbreak.

Across both parties, those who are paying the most attention to news about the outbreak are the least likely to say that people and institutions are overreacting to the coronavirus outbreak.

Republicans and Democrats back measures aimed at ‘flattening the curve’ 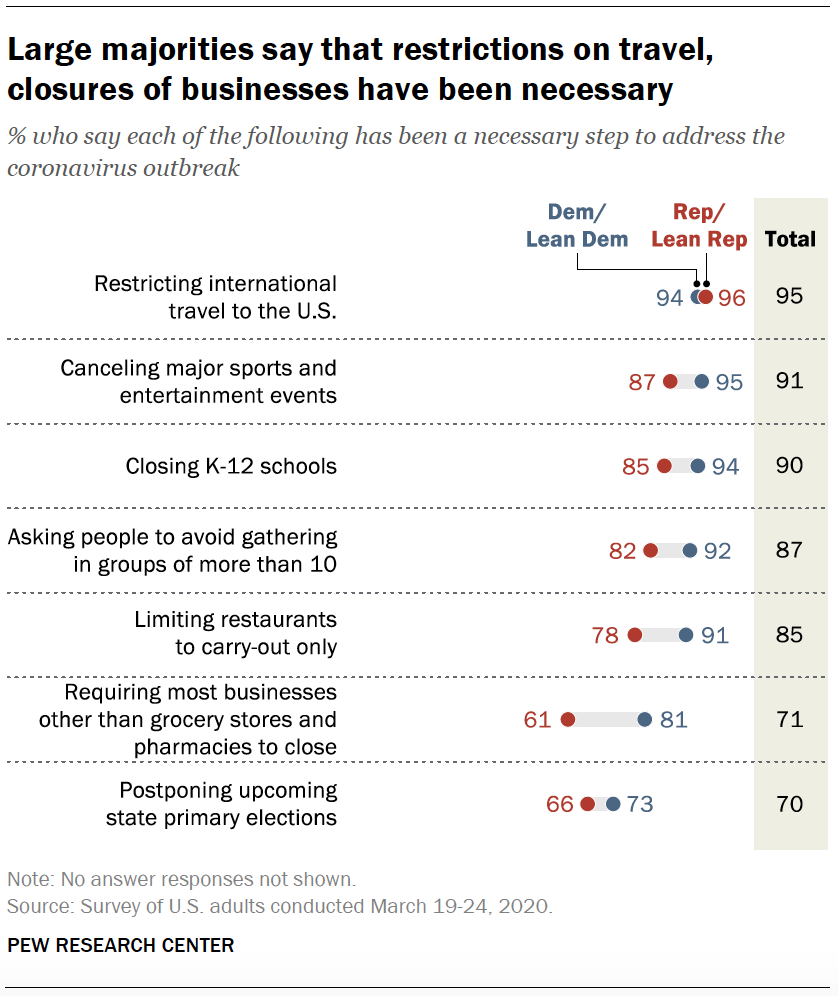 In thinking about specific steps that have been announced to address the coronavirus outbreak, majorities of Republicans and Democrats view a range of measures as necessary to stem the spread of the virus.

For instance, overwhelming majorities of both Republicans (96%) and Democrats (94%) say restricting international travel to the U.S. is necessary.

Most also say it is necessary to cancel major sports and entertainment events, close K-12 schools, avoid gathering in large groups and limit restaurants to carry-out only. In all four cases, somewhat larger majorities of Democrats than Republicans view each action as necessary.

There also is majority support for requiring most businesses other than grocery stores and pharmacies to close and for postponing upcoming state primary elections. However, among both Republicans and Democrats there is slightly lower support for these two measures than for other steps to confront the outbreak

Americans who primarily get news through social media are least likely to follow COVID-19 coverage, most likely to report seeing made-up news

Before the pandemic, three-quarters of Americans said people would cooperate with each other in a crisis