Young people have more negative views of impact of billionaires

Pew Research Center has conducted extensive research on the public’s economic attitudes, including opinions about economic inequality. As part of this research, we conducted this study to better understand Americans’ views of the factors behind why some people are rich or poor. We also wanted to learn if attitudes had changed since September 2018.

For this analysis, we surveyed 12,638 U.S. adults in January 2020. Everyone who took part is a member of Pew Research Center’s American Trends Panel (ATP), an online survey panel that is recruited through national, random sampling of residential addresses. This way nearly all U.S. adults have a chance of selection. The survey is weighted to be representative of the U.S. adult population by gender, race, ethnicity, partisan affiliation, education and other categories. Read more about the ATP’s methodology. We also conducted a contemporaneous telephone survey, conducted Jan. 8-13 among 1,504 adults, to measure changes in attitudes and to determine if there were mode differences between the survey conducted online and the survey on the telephone.

On the fundamental question of why some people are rich and others are poor, more Americans point to the advantages they possess – or the obstacles they face – rather than their work ethic. Nearly two-thirds of U.S. adults (65%) say the main reason some people are rich is because they have had more advantages in life than most other people; far fewer say it is because they have worked harder than others (33%).

As in the past, these views are deeply divided along partisan lines, according to a new survey by Pew Research Center, conducted Jan. 6-19 among 12,638 U.S. adults who are members of the Center’s American Trends Panel. Large majorities of Democrats and Democratic-leaning independents say advantages in life have more to do with why someone is rich (82%) and that having faced more obstacles has more to do with why someone is poor (86%). 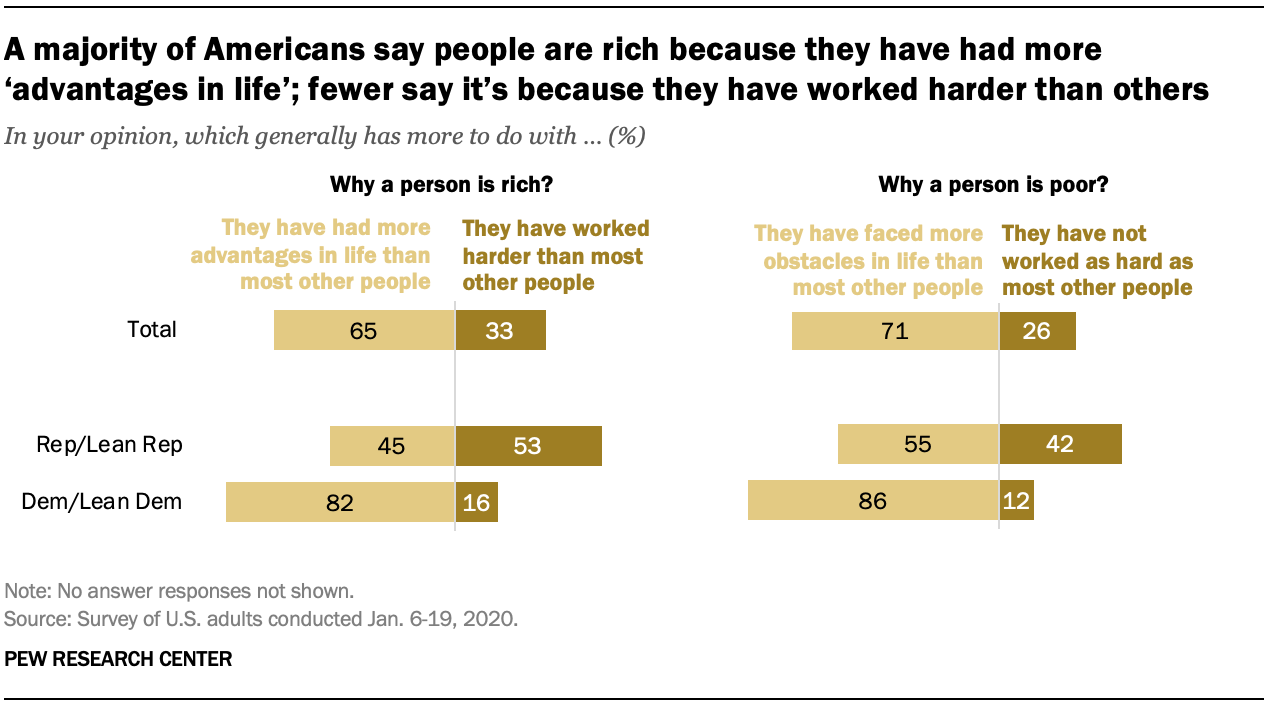 Views of why people are rich have changed significantly over the past few years, with a growing share of Americans saying the main reason a person is rich is because they possess more advantages than other people.

In a separate telephone survey also conducted in January, the share saying the main reason a person is rich is because they have more advantages than others has increased 13 percentage points since 2018, while there has a been a comparable decline (12 points) in the share attributing a person’s wealth more to hard work. These changes are evident among both Republicans and Democrats. 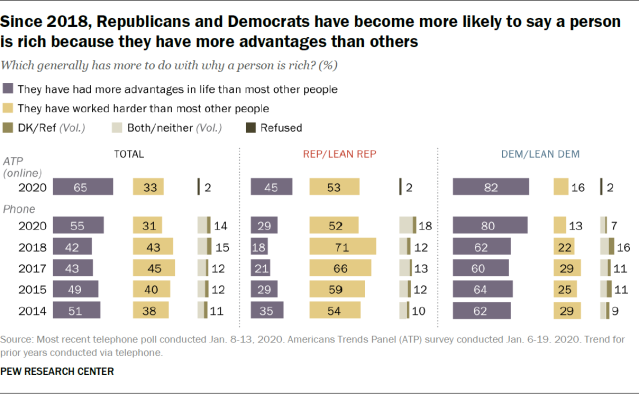 It is important to note that there are mode differences between the telephone and online surveys. The differences are more pronounced among Republicans than Democrats. Comparing the January telephone and panel surveys among Republicans, similar shares say that rich people are wealthy more because “they have worked harder than most other people.” However, there is a 16 percentage point difference in the shares who attribute being rich to having “had more advantages in life” (29% on the phone, 45% online). One reason for this difference is that a sizable share of Republicans volunteer “both” (14%) or “don’t know” (4%) as a response on the telephone, while these types of volunteered responses are not possible online (a small share – 2% – skip the question online).

Democrats offer similar views on this question, regardless of survey mode. Roughly eight-in-ten say people are rich because they have had more advantages in life, though that is the highest share offering this response since the question was first asked in 2014. For more on survey mode differences, see “Trends are a cornerstone of public opinion research. How do we maintain them when there’s a shift in survey mode?”

Views of the impact of billionaires on the country

When asked about the impact of billionaires on the country, a majority (58%) say it is neither bad nor good, according to the January survey. 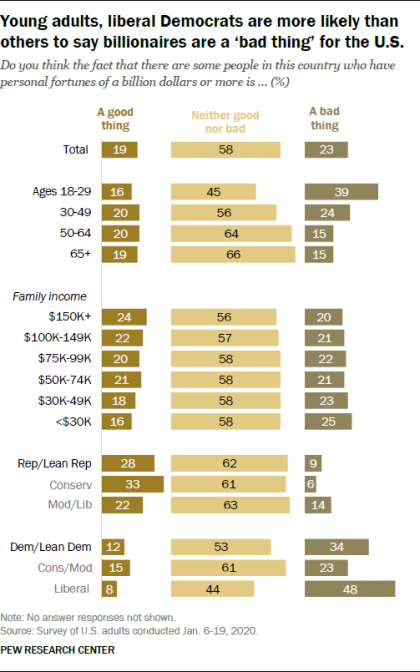 Nearly a quarter (23%) say the fact that some people have personal fortunes of a billion dollars or more is a bad thing, while slightly fewer (19%) see this as a good thing.

Republicans and Democrats differ over the impact of billionaires. While a majority of Republicans (62%) say having billionaires in this country is neither bad nor good, more view this positively (28%) than negatively (9%).

By contrast, more Democrats say the fact that some people have fortunes of a billion dollars or more is bad (34%) than good (12%); 53% say it is neither bad nor good.

Liberal Democrats, in particular, have a negative view about billionaires. Nearly half (48%) say they are a bad thing for the country, roughly twice the share of conservative and moderate Democrats (23%) who say this.

Young adults are more likely than older people to say that billionaires are a bad thing. Nearly four-in-ten adults under age 30 (39%) say the fact that some have fortunes of a billion dollar of more is a bad thing; that compares with 24% of those ages 30 to 49 and just 15% of those 50 and older. 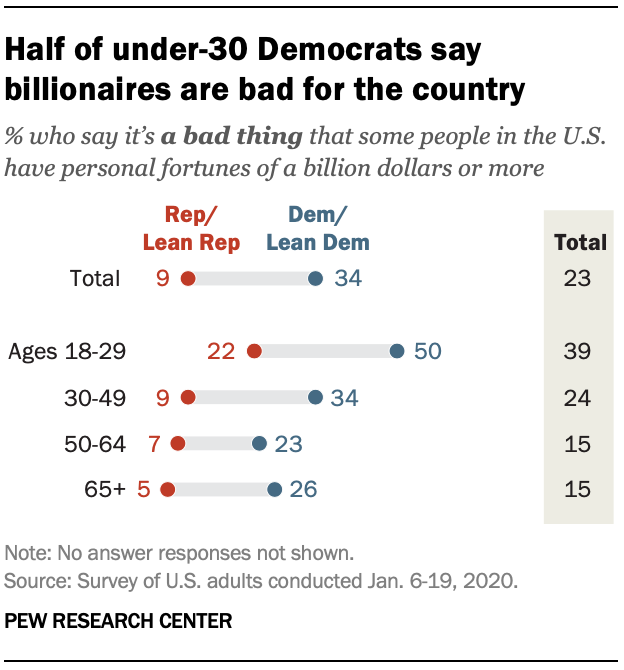 In both parties, those under age 30 are more likely than older people to express negative views of how billionaires affect the country. Still, while half of young Democrats say billionaires are a bad thing, just 22% of 18 to 29-year-old Republicans agree.