For this report on views of the nation’s economy, we surveyed 12,638 U.S. adults in January 2020. Everyone who took part is a member of Pew Research Center’s American Trends Panel (ATP), an online survey panel that is recruited through national, random sampling of residential addresses. This way nearly all U.S. adults have a chance of selection. The survey is weighted to be representative of the U.S. adult population by gender, race, ethnicity, partisan affiliation, education and other categories. Read more about the ATP’s methodology. Here are the questions used for the report, along with responses, and its methodology. 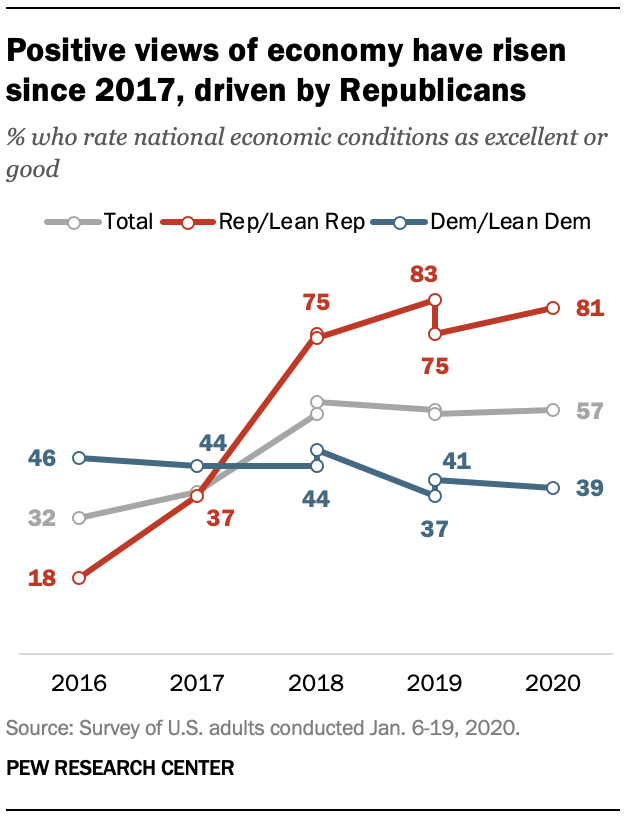 The public’s views of the nation’s economy remain more positive than at any point in the past two decades. In addition, more Americans say President Trump’s policies have made the economy better (44%) than worse (29%), while 26% say they have not had much effect.

The public’s ratings of economic conditions turned much more favorable shortly after Trump took office in 2017, as a result of a surge in positive views among Republicans. These attitudes have shown little change more recently.

Today, 57% of Americans rate the national economy as excellent (16%) or good (42%). This is virtually unchanged from last September, when 56% of the public held positive views of the economy. A third of the public views economic conditions as only fair; just 9% say the nation’s economy is in poor shape.

The national survey by Pew Research Center, conducted Jan. 6-19 among 12,638 adults, finds that views of the economy – and the impact of Trump’s policies – continue to be deeply divided along partisan lines.

Currently, 81% of Republicans and Republican-leaning independents say the economy is excellent or good. These views have changed only modestly over the past two years. But between November 2016 (just before Trump’s victory in the presidential election) and March 2017 the share of Republicans with a positive view of the economy approximately doubled, from 18% to 37%. And by November 2018, they had doubled again, to 75%.

By contrast, Democrats’ assessments of economic conditions have changed only modestly since before Trump took office. Currently, 39% of Democrats and Democratic leaners say conditions are excellent or good. In November 2016, 46% had a positive impression of the economy. 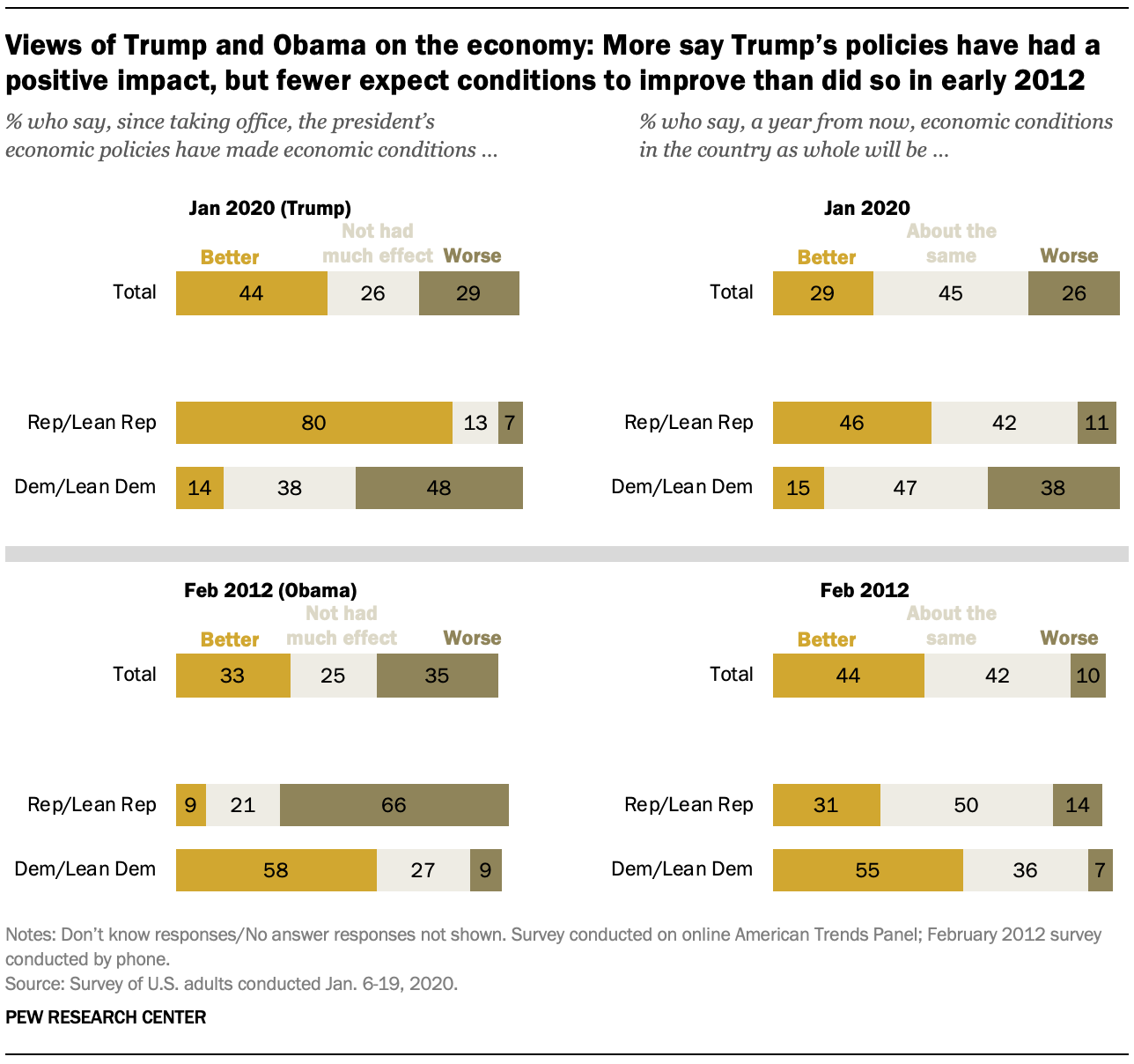 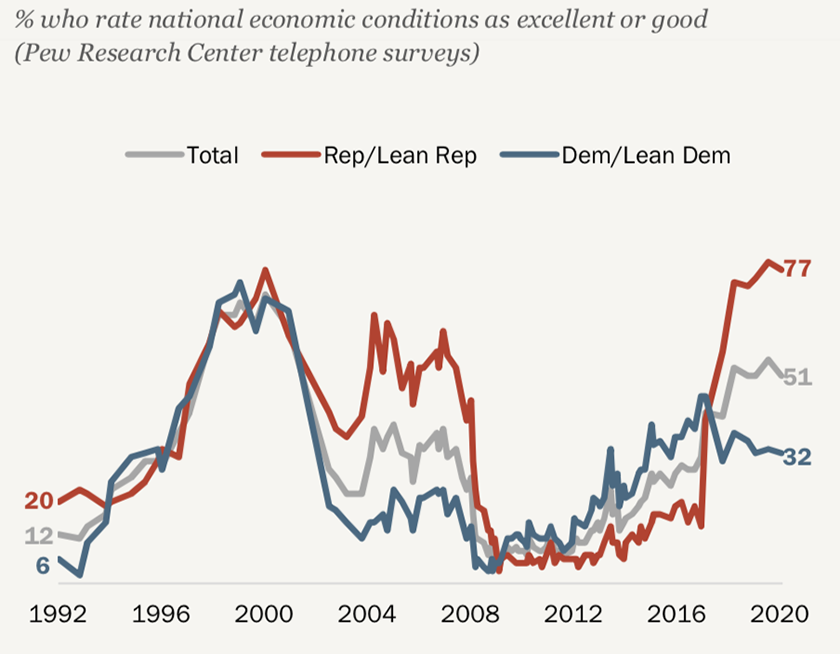 Over the last several years, the Center has tracked perceptions of economic conditions on both telephone and web surveys. Mode differences in perceptions of the economy are fairly modest. In the January survey conducted on Pew Research Center’s American Trends Panel, on which this report is largely based, 57% say the economy is excellent or good; 33% say economic conditions are only fair, while 9% say they are poor. In a contemporaneous telephone survey, conducted Jan. 8-13 among 1,504 adults, 51% say conditions are excellent or good, 34% say they are only fair, while 14% say they are poor. And in the summer of 2019, 57% rated economic conditions positively on the ATP, while 55% did so on a phone survey conducted a few weeks earlier.

Public views of how Trump’s policies have affected the economy are more positive than they were for Obama’s policies at the same point in his presidency, when overall assessments of the economy were much more negative than they are currently. In February 2012, roughly equal shares said  Obama’s economic policies had made things better (33%) and worse (35%); 25% said they had not had much effect. At that time, only 11% of the public rated the economy as excellent or good, with overwhelming majorities of both Democrats (84%) and Republicans (94%) rating the national economy negatively.

However, optimism that conditions would improve was relatively high eight years ago. Today, public outlook for the economy a year from now is mixed: Currently, 29% of Americans say conditions will be better, 26% worse, while 45% say they will be about the same as now. In February 2012, 44% expected economic conditions to improve; just 10% said they would get worse, while 42% said they would be about the same as they were then.

Opinions about the impact of presidents’ policies and the future course of the economy also are highly partisan. In the current survey, an overwhelming share of Republicans (80%) say Trump’s policies have made economic conditions better. Democrats are divided: Nearly half (48%) say Trump’s policies have had a negative impact, 38% say they have not had much of an effect and 14% say they have helped the economy.

Views about the state of the economy a year from now are somewhat less partisan, but while nearly half of Republicans (46%) expect economic conditions in the U.S. to be better a year from now than they are today, just 15% of Democrats say the same.

Demographic differences in views of economy

These demographic gaps are little changed over the course of the last few years. Americans ages 65 and over are the most positive in their evaluations of the economy, with 70% saying it is in excellent or good shape. By comparison, about half of 18-29 year olds (47%) say the same. And while more than six-in-ten white people (64%) offer positive evaluations of the economy, that compares with roughly half of Hispanic people (49%) and just a third of black Americans (33%).

There is a 12 percentage-point gender gap in these views: 64% of men say the economy is doing well, compared with 52% of women. And while 64% of college graduates say economic conditions are excellent or good, 54% of those without a college degree say the same.

Among Republicans and Republican-leaning independents, a large majority (81%) rate the economy as excellent or good. Conservative Republicans are particularly likely to view the economy positively: 88% do so, including 41% who say the economy is in excellent shape. Among moderate and liberal Republicans, 72% offer positive ratings, with 18% saying economic conditions are excellent.

Overall, 39% of Democrats and Democratic-leaning independents rate the economy as excellent or good, and there are only modest ideological differences in these views. 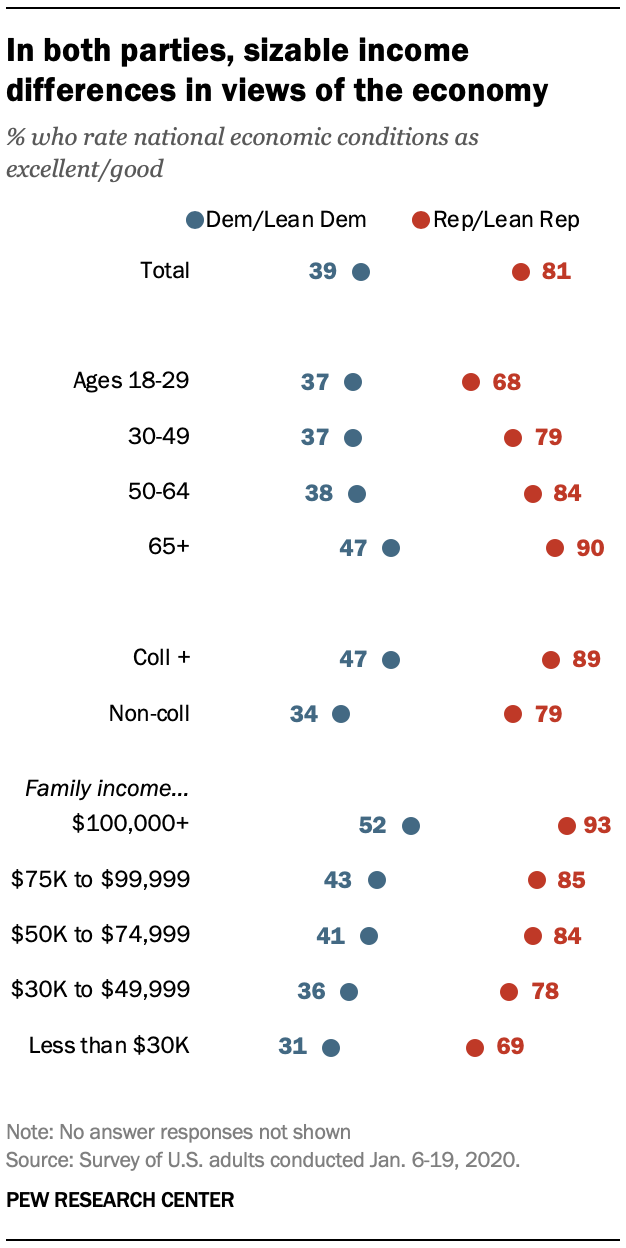 Among Democrats and Democratic leaners there is only modest variation in these views by age, although Democrats 65 and older view the economy more positively than those under age 65 (47% vs. 37%).

Across income and partisan groups, high income Republicans are the most likely to see the economy as in excellent or good shape, while low income Democrats are least likely to say this. But partisanship is a bigger factor than income in these evaluations: In fact, Republicans with incomes of less than $30,000 (69%) offer significantly more positive ratings of the economy than Democrats with incomes of $100,000 or more (52%).

Opinions about the state of the nation’s economy are correlated with views of Trump’s job performance. People who have the most positive views of economic conditions – the 16% of adults who say the economy is excellent – overwhelmingly approve of Trump. Nearly nine-in-ten (86%) approve of his performance, including 76% who strongly approve.

Yet those who say economic conditions are good are not nearly as supportive of Trump. Half of this group approves of his job performance, with only about a third (36%) strongly approving.

Among the 15% of Republicans who rate conditions as only fair, a narrow majority (55%) approves of his job performance. Among Democrats who view the economy as only fair, just 4% approve of the job Trump is doing.