Data in this report are drawn from the panel wave conducted September 3 to September 15, 2019. A total of 9,895 panelists responded out of 10,478 who were sampled, for a response rate of 94%. This does not include four panelists who were removed from the data due to extremely high rates of refusal or straightlining. The cumulative response rate accounting for nonresponse to the recruitment surveys and attrition is 5.9%. The break-off rate among panelists who logged onto the survey and completed at least one item is 0.8%. The margin of sampling error for the full sample of 9,895 respondents is plus or minus 1.5 percentage points. 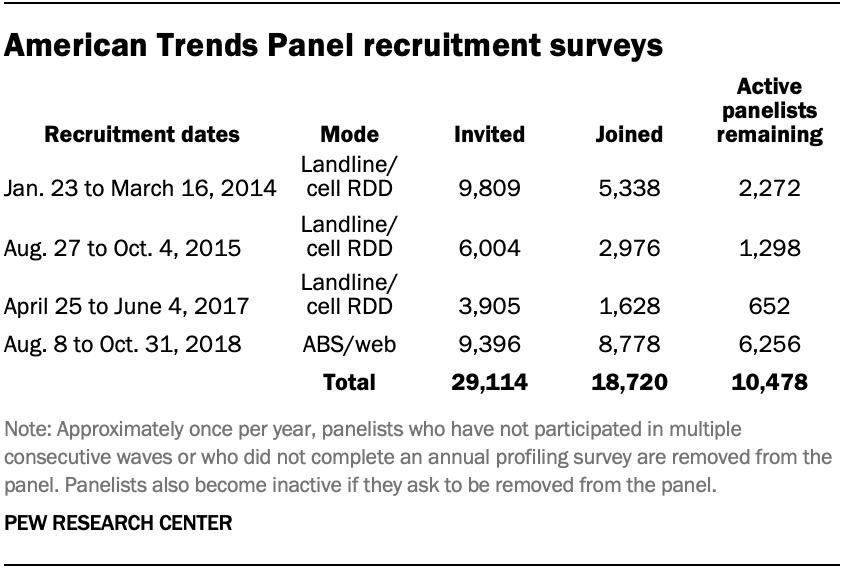 In August 2018, the ATP switched from telephone to address-based recruitment. Invitations were sent to a random, address-based sample (ABS) of households selected from the U.S. Postal Service’s Delivery Sequence File. In each household, the adult with the next birthday was asked to go online to complete a survey, at the end of which they were invited to join the panel. For a random half-sample of invitations, households without internet access were instructed to return a postcard. These households were contacted by telephone and sent a tablet if they agreed to participate. A total of 9,396 were invited to join the panel, and 8,778 agreed to join the panel and completed an initial profile survey. Of the 18,720 individuals who have ever joined the ATP, 10,478 remained active panelists and continued to receive survey invitations at the time this survey was conducted.

Sampling errors and test of statistical significance take into account the effect of weighting. Interviews are conducted in both English and Spanish, but the American Trends Panel’s Hispanic sample is predominantly U.S. born and English speaking. 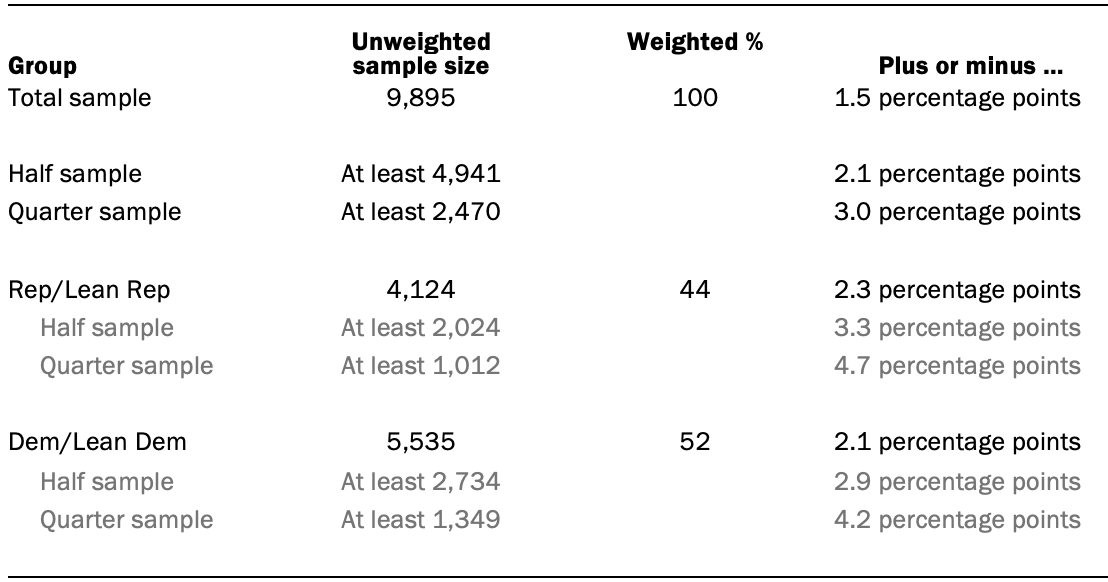 Some analysis in this report is based on telephone interviews conducted September 5 to September 16, 2019, among a national sample of 2,004 adults, 18 years of age or older, living in all 50 U.S. states and the District of Columbia (401 respondents were interviewed on a landline telephone, and 1,603 were interviewed on a cellphone, including 1,106 who had no landline telephone). The survey was conducted by interviewers under the direction of Abt Associates. A combination of landline and cellphone random-digit-dial samples were used; both samples were provided by Survey Sampling International, LLC. Interviews were conducted in English and Spanish. Respondents in the landline sample were selected by randomly asking for the youngest adult male or female who is now at home. Interviews in the cell sample were conducted with the person who answered the phone, if that person was an adult 18 years of age or older. The weighting procedure corrected for the different sampling rates. For detailed information about our survey methodology, see U.S. Survey Research.

The combined landline and cellphone sample is weighted using an iterative technique that matches gender, age, education, race, Hispanic origin and nativity, and region to parameters from the Census Bureau’s 2017 American Community Survey one-year estimates and population density to parameters from the decennial census. The sample also is weighted to match current patterns of telephone status (landline only, cellphone only, or both landline and cellphone), based on extrapolations from the 2018 National Health Interview Survey. The weighting procedure also accounts for the fact that respondents with both landline and cellphones have a greater probability of being included in the combined sample and adjusts for household size among respondents with a landline phone.