Majority of Republicans say Democrats are ‘more unpatriotic’ than other Americans

Three years ago, Pew Research Center found that the 2016 presidential campaign was “unfolding against a backdrop of intense partisan division and animosity.” Today, the level of division and animosity – including negative sentiments among partisans toward the members of the opposing party – has only deepened. 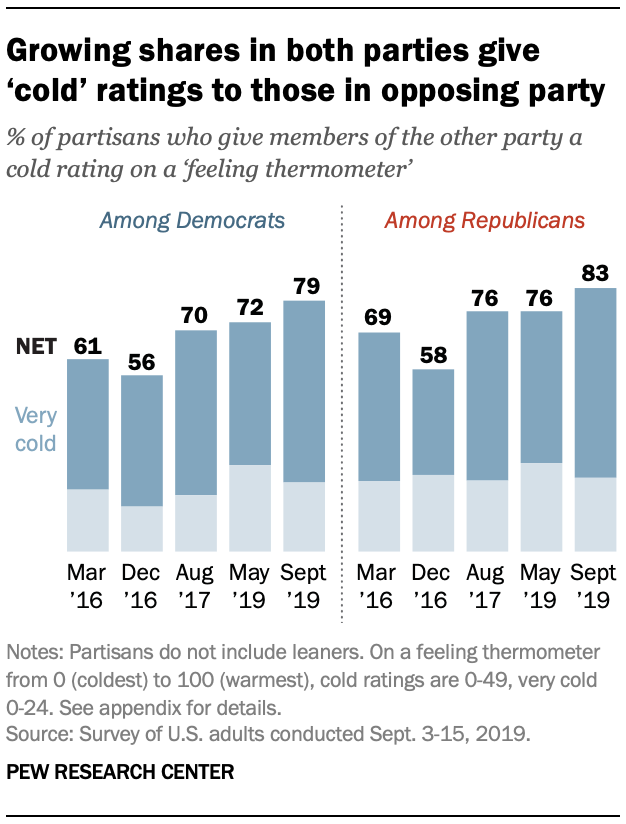 The share of Republicans who give Democrats a “cold” rating on a 0-100 thermometer has risen 14 percentage points since 2016 – with virtually all of the increase coming in “very cold” ratings (0-24). Democrats’ views of Republicans have followed a similar trajectory: 57% give Republicans a very cold rating, up from 41% three years ago.

The survey by Pew Research Center was conducted Sept. 3-15 among 9,895 adults (it was completed before House Speaker Nancy Pelosi’s Sept. 24 announcement of an impeachment inquiry into President Donald Trump). It finds that both Republicans and Democrats express negative views about several traits and characteristics of those in the opposing party, and in some cases these opinions have grown more negative since 2016.

For the most part, Republicans are more likely than Democrats to ascribe negative characteristics to people in the opposing party, with one exception: 75% of Democrats say Republicans are “more closed-minded” than other Americans, while 64% of Republicans say the same about Democrats. 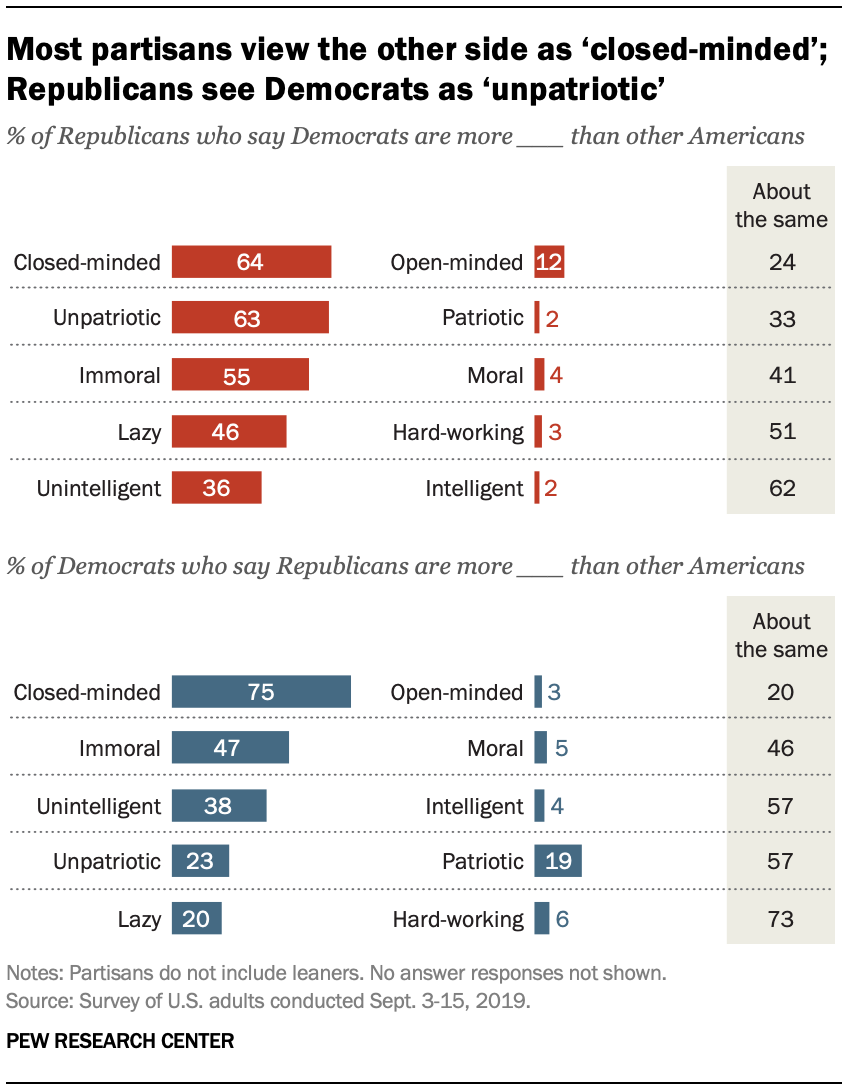 The survey also finds that partisan hostility extends beyond politics. Fewer than half of Democrats (45%) and just 38% of Republicans say that while members of the other party feel differently about politics, they share many of their other values and goals. Majorities in both parties say those in the opposing party do not share their nonpolitical values and goals.

As prior surveys on partisan polarization have shown, partisans who are highly attentive to politics are most likely to express negative sentiments about the opposing party. For example, both Republicans and Democrats who follow government and public affairs most of the time are more likely to give cold ratings to members of the other party – and warm ratings to their fellow partisans – than those who follow government less closely.

Even as Republicans and Democrats have grown more critical of each other, they acknowledge – and voice concern about – the partisanship dividing the nation. Overwhelming majorities in both parties (85% of Republicans and 78% of Democrats) say divisions between the two parties are increasing. Similar shares express concern about the partisan divide, with about half in each party saying they are very concerned about this. 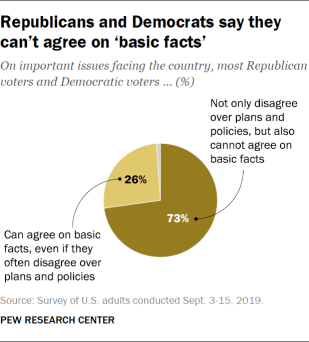 Partisans also generally agree about their inability to agree on “basic facts.” Overall, 73% of the public – including 77% of Republicans and 72% of Democrats – say that voters in both parties “not only disagree over plans and policies, but also cannot agree on the basic facts.”

These are among the other important findings from the survey on how partisans view each other and the political parties:

Majorities of Americans describe both parties as ‘too extreme.’ More Americans say the Democratic Party than Republican Party is described well by such phrases as “is respectful and tolerant of different types of people,” “cares about the middle class” and “governs in an honest and ethical way.” But nearly identical majorities say each party is described at least somewhat well by the phrase “is too extreme in its positions” (63% say this about the Republican Party, 61% about the Democratic Party).

Partisan ‘leaners’ also are hostile to the opposing party. Independents who lean toward the Republican and Democratic parties are much less likely than those who identify with a party to express warm feelings about the people in their own parties. But large majorities of Republican and Democratic leaners give cold ratings to the people in the opposing party, and there are only modest differences between leaners and partisan identifiers in these views.

Next: 1. The partisan landscape and views of the parties Next Page → ← Prev Page