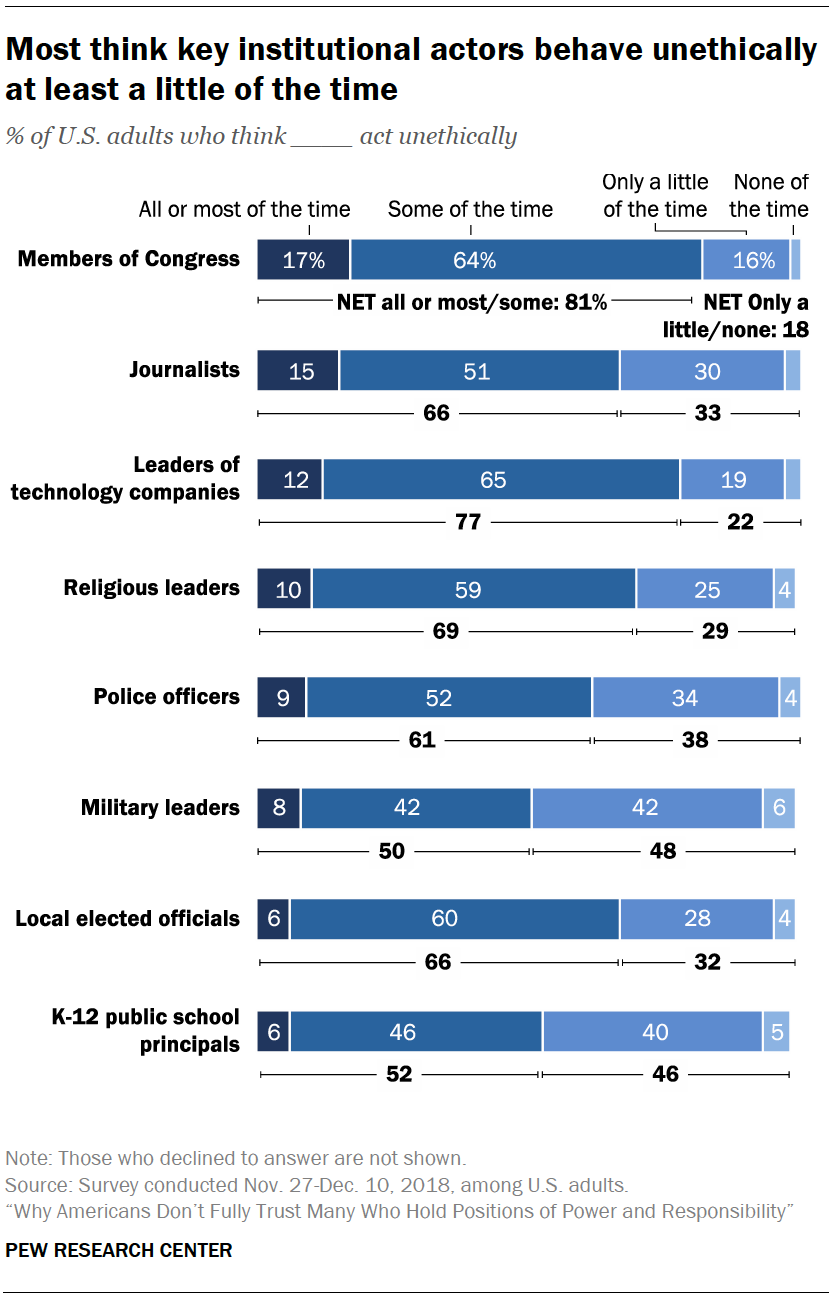 People invest their trust in institutions and those who have power for a variety of reasons. Researchers have found that people’s confidence in others and organizations can include their judgments about the competence, honesty and benevolence of the organizations or individuals they are assessing, as well as factors such as empathy, openness, integrity and accountability. These perceptions can be seen as building blocks of trust. 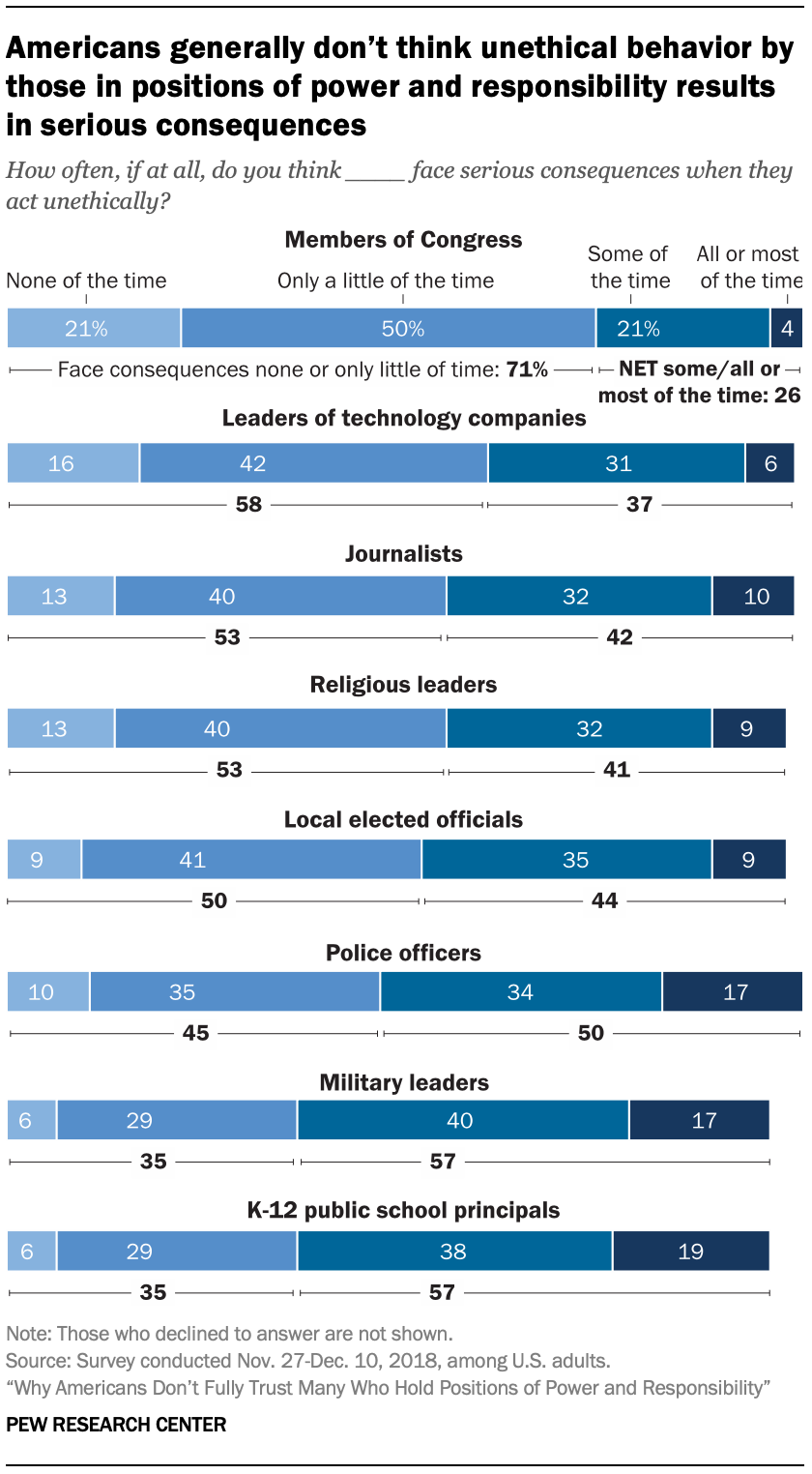 Notable shares of the public give people in these powerful jobs low ratings when it comes to behaving ethically, dealing with ethical problems in their ranks and admitting mistakes. Half or more of Americans think these influential people act unethically at least some of the time, ranging from 50% who believe this about military leaders to 81% who feel members of Congress act unethically “some,” or “all or most of the time.” Additionally, 77% believe this about the leaders of technology companies and 69% think this about religious leaders.

At the same time, a third or more of Americans think that unethical behavior is treated relatively lightly – that is to say, wrongdoers face serious consequences only a little of the time or less often. Indeed, majorities believe that members of Congress (79%), local elected officials (57%), leaders of technology companies (55%) and journalists (54%) admit mistakes and take responsibility for them only a little of the time or none of the time. Some 49% say the same of religious leaders. 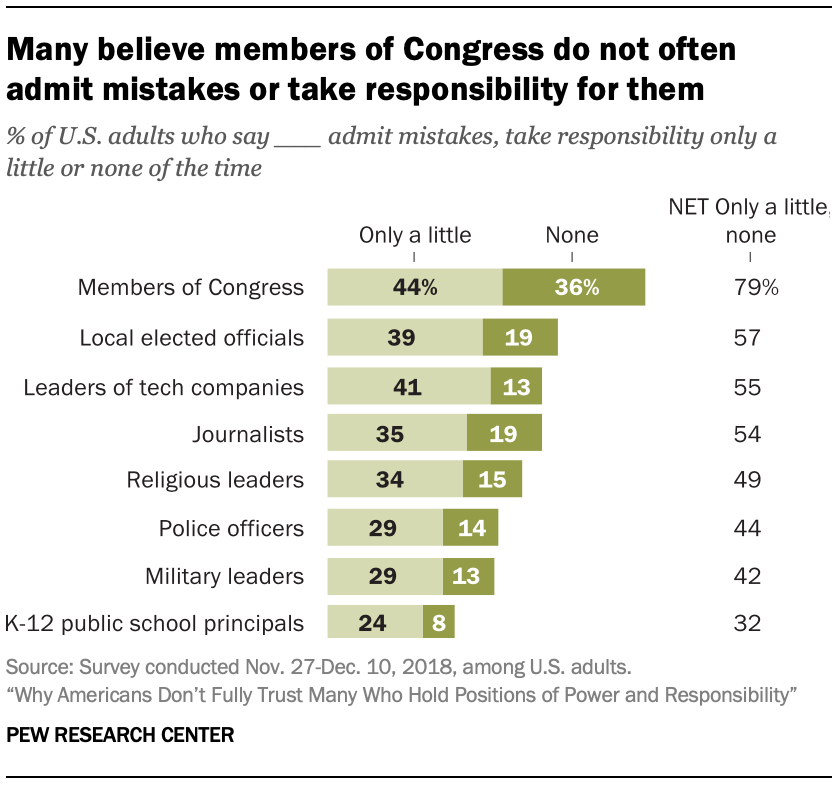 These views emerge in a survey that covered several dimensions of public confidence in those who hold these positions of power and responsibility. The questions probed public views about several essential aspects of public confidence – such as whether these groups care about people, handle resources responsibly or provide accurate information to the public. Survey respondents were asked to choose whether the group members act in these ways “all or most of the time,” “some of the time,” “only a little of the time” or “none of the time.”

The survey shows that beyond the realms of ethics and transparency, Americans have varying levels of confidence in key aspects of job performance by those who hold important positions of power and responsibility. For instance, U.S. adults have relatively high levels of confidence that these people will perform key aspects of their duties (for example, that leaders of technology companies build products and services that enhance people’s lives) “some of the time” or more often, and that they will handle resources responsibly.

Generally, the public has the most confidence in the way K-12 public school principals, military leaders and police officers operate when it comes to caring about people, providing fair and accurate information to the public and handling resources responsibly. Some 84% think principals care about the students they serve “some of the time” or “all or most of the time,” 79% think police officers care about them at that level of frequency, and 73% have the same level of confidence in military leaders. The public places somewhat lower – but still relatively high – levels of confidence in religious leaders, journalists and local elected officials. 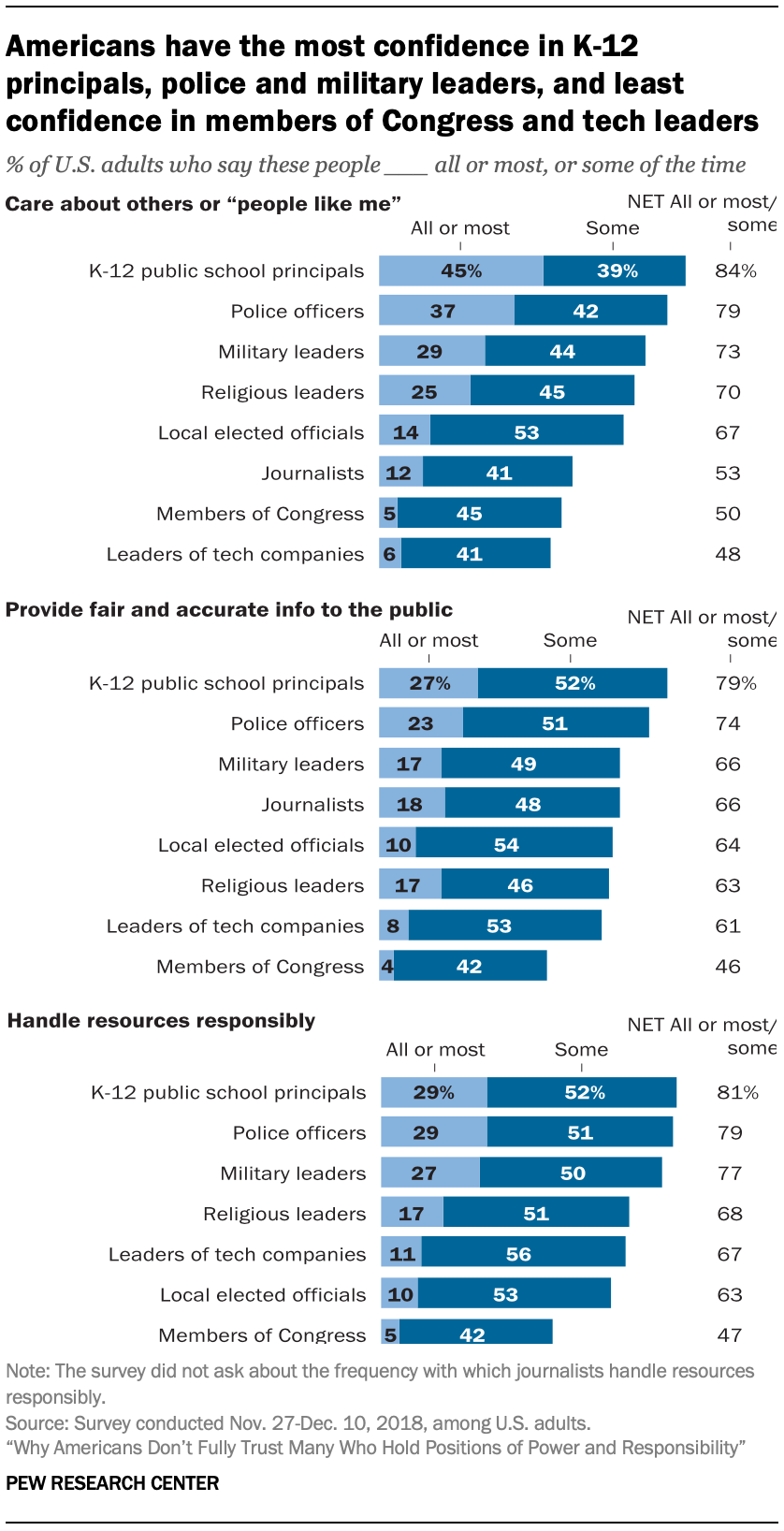 When queried about their views related to specific aspects of each group’s mission, the public gives relatively good marks to all of these actors, with military leaders ranking the highest and members of Congress the lowest. For instance, 90% of adults believe military leaders do a good job preparing military personnel to protect the country “all or most of the time” or “some of the time,” 83% think technology company leaders build products and services that enhance lives, and 63% think local elected officials do a good job promoting laws that serve the public. 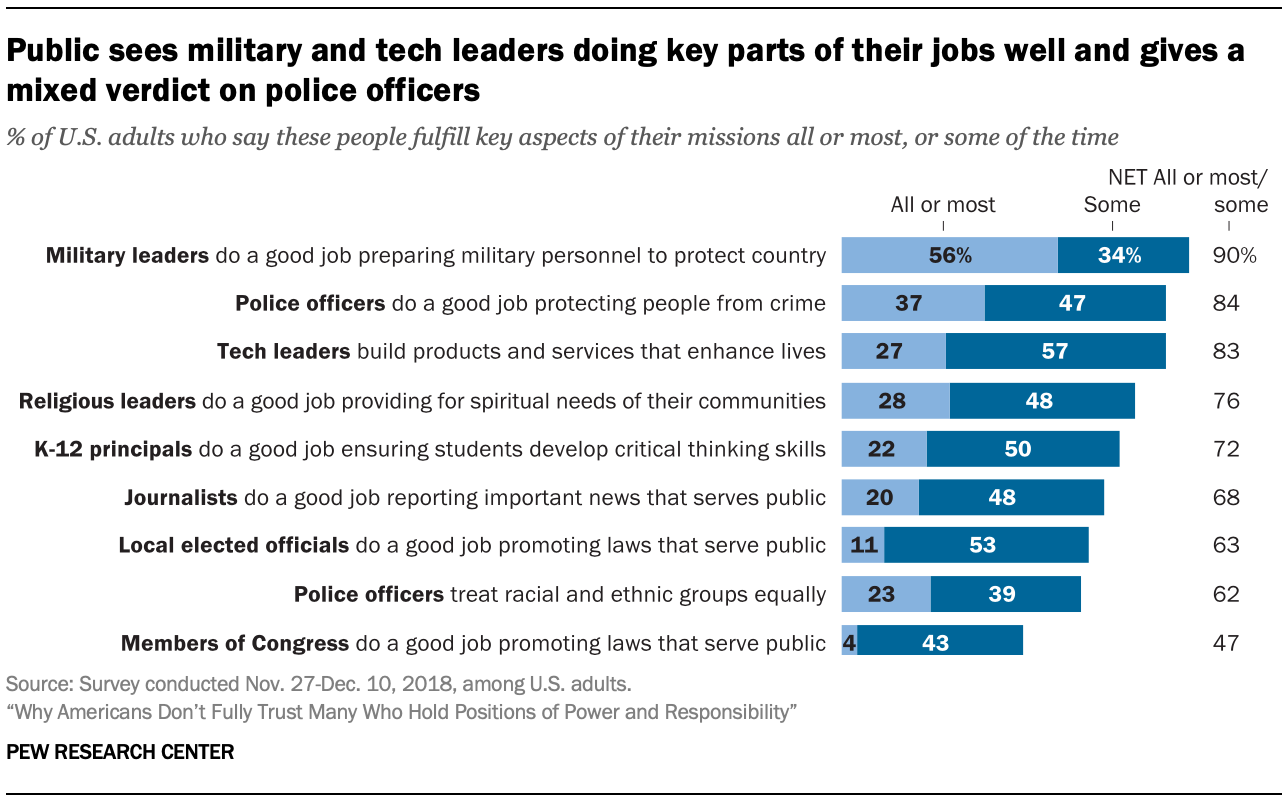 These readings about those who have power and responsibility were gathered in four different segments of a survey of 10,618 U.S. adults conducted Nov. 27 to Dec. 10, 2018, using the Center’s nationally representative American Trends Panel. Panelists were randomly assigned to one of the four segments, and each segment focused on questions about two of the eight categories of people in positions of power and responsibility covered in this report. The margin of sampling error for the smallest of the four samples is plus or minus 3.0 percentage points.

The groups of those who have power and responsibility were chosen because they play key roles in American society and have important effects on the day-to-day lives of Americans. This research is part of the Center’s extensive and ongoing focus on issues tied to trust, facts and democracy, and the interplay among them. It is closely aligned with the Center’s recent exploration of the public’s nuanced views about trust in scientific experts.

Views of those who hold positions of power and responsibility are linked to political party, race and gender

Here are some other key findings related to partisanship and demographic differences about the performance of these eight major groups of those who have power and responsibility in various institutions:

Partisan differences: Republicans and independents who lean toward the Republican Party are less likely than Democrats and Democratic leaners to believe journalists perform key parts of their jobs “all or most of the time” or “some of the time.” For instance, three-in-ten Republicans and Republican leaners (31%) believe journalists fairly cover all sides of an issue at least some of the time, while about three-quarters of Democrats and those who lean toward the Democratic party (74%) say the same – a 43-percentage-point difference in opinion between the two groups.

Democrats and those who lean Democratic are more likely than their Republican counterparts to think K-12 public school principals consistently perform key aspects of their jobs. For instance, Democrats and leaners are more likely than Republicans and their leaners to believe that principals handle resources in a responsible way (87% vs. 76%) and to think that principals do a good job ensuring that students are developing critical thinking and problem-solving skills (76% vs. 68%).

In addition, Republicans and those who lean toward the Republican Party are more likely than Democrats and those who lean toward the Democratic Party to express positive opinions about religious leaders. For instance, fully three-quarters of Republicans say religious leaders provide fair and accurate information to the public at least some of time, compared with just 54% of Democrats who say the same.

Black people are also less likely than white Americans to believe that local officials do their jobs well at least some of the time.

Gender differences: Women are more likely than men to have confidence in members of Congress and journalists doing their jobs much of the time.

Next: 1. Where public confidence stands about eight groups that have positions of power and responsibility Next Page → ← Prev Page