Electability matters to Democrats, but so do policies, character 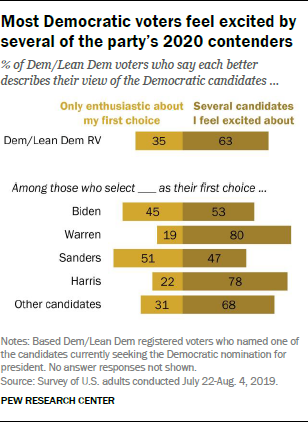 With more than five months to go before the first votes are cast in the 2020 presidential election, a majority of Democratic voters who express a preference for one of the candidates (63%) say they feel excited about several of the candidates currently vying for the party’s nomination. Far fewer (35%) say they are enthused only by their first choice for the nomination.

A new survey finds that, in an open-ended question about their preferences for the party’s presidential nomination, 26% of Democratic and Democratic-leaning registered voters name Joe Biden as their first choice, 16% name Elizabeth Warren, 12% favor Bernie Sanders, while 11% back Kamala Harris and 5% favor Buttigieg.

However, a quarter of Democrats do not express a preference for the nomination, according to the new survey by Pew Research Center, conducted July 22-Aug. 4 among 4,175 adults, including 1,757 Democratic and Democratic-leaning registered voters. 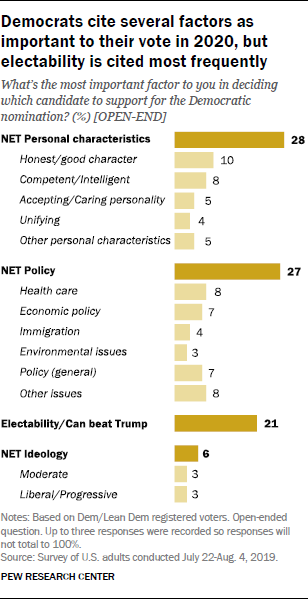 The survey finds wide differences among Democratic voters on whether they feel excited by several candidates or just their own top choice. About half of Sanders supporters (51%) say they are only enthusiastic about their first choice for the nomination and 45% of Biden supporters say the same.

The survey finds that Democratic voters cite several factors as important in deciding whom to support for the nomination, including the personal characteristics of candidates and their positions on health care and other issues. Still, the most frequent single response to the open-ended question, offered by 21% of Democrats, is that the candidate is able to defeat Donald Trump.

About as many Democrats (27%) cite specific policy positions as being most important in their decision to back a particular candidate. Roughly equal shares cite health care (8%) and economic policy (7%), while smaller shares mention immigration (4%) or environmental issues (3%).

The survey also finds little change in Trump’s job approval rating, which has remained unusually stable over the course of his presidency.

In addition, the public’s views of the effects of Trump’s presidency in several different realms also have changed little since he was elected – and from the expectations people had for his presidency before he was elected. In the new survey, for example, 70% of Americans say Trump has definitely or probably not set a high moral standard for his presidency. In October 2016, just before the presidential election, 66% of adults said Trump, if elected, definitely or probably would not set a high moral tone for the presidency.

At this early stage of the presidential race, there are notable demographic differences in the preferences of Democratic voters. Roughly four-in-ten Democrats (41%) ages 65 and older name Biden as their first choice for the nomination, as do about a third of Democratic voters ages 50 to 64 (32%). Biden’s support is much lower among younger Democrats; among those under age 30, just 7% name the former vice president as their first choice. 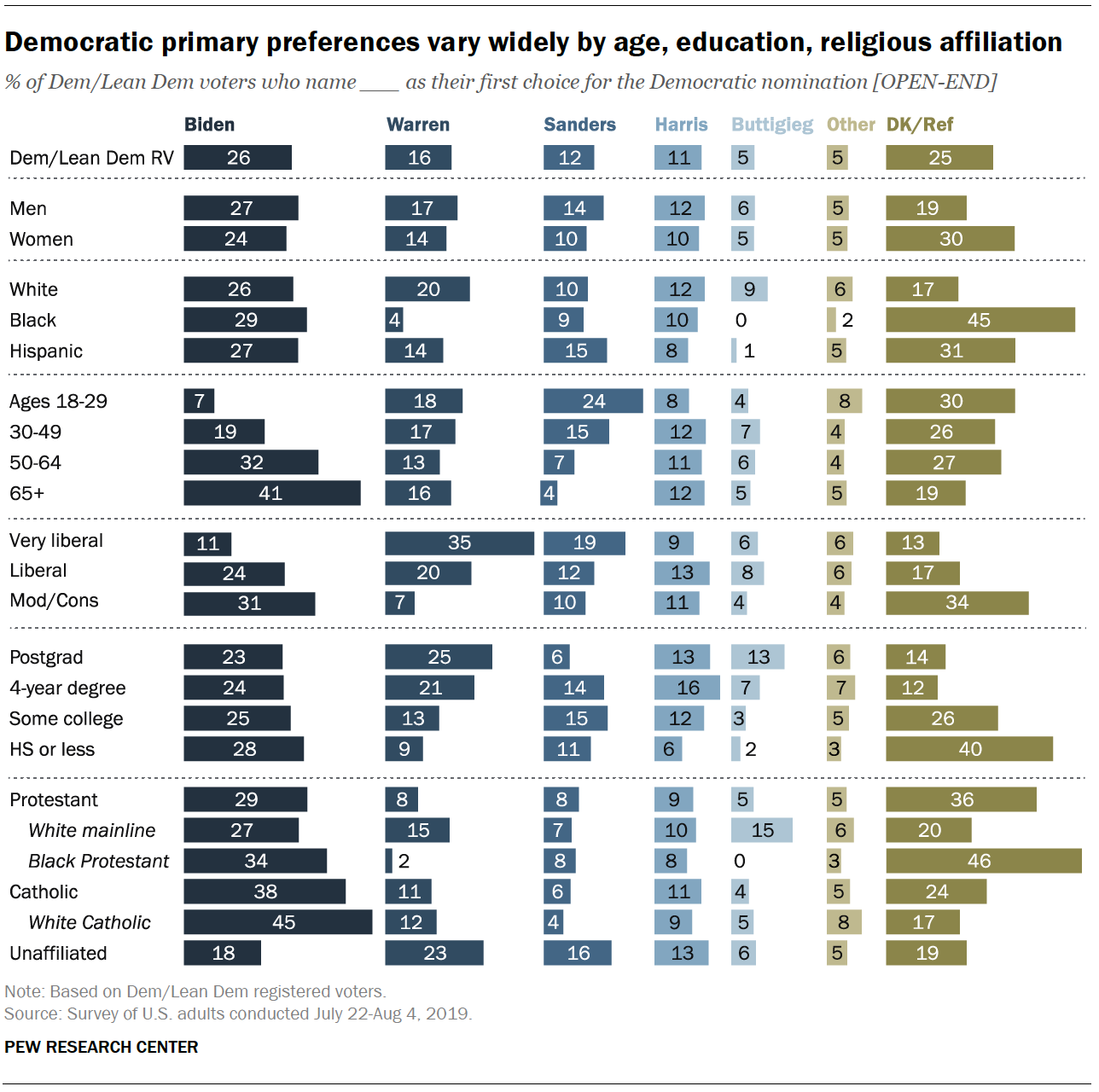 In contrast with Biden, Sanders draws much more support among Democrats under 30 (24%) than those 65 and older (4%). Unlike Biden and Sanders, there are only modest differences across age groups in support for Warren and Harris.

Biden is the first choice of 29% of black Democratic voters, compared with about 10% each for Sanders and Harris. A relatively large proportion of black Democrats (45%) express no preference in the open-ended question. Among white Democrats, preferences are more divided, with 26% naming Biden as their first choice, 20% naming Warren, and smaller shares supporting Harris (12%), Sanders (10%) and Pete Buttigieg (9%).

There are also stark divisions within the party by ideology. About three-in-ten  of moderate and conservative Democrats (31%) select Biden as their first choice, while only 11% of those who self-identify as “very liberal” do so. Democrats who describe themselves as “very liberal” are substantially more likely to prefer Warren (35% select her as their first choice) or Sanders (19%).

Warren and Buttigieg draw larger shares of their support from Democrats with a four-year college degree – especially those with postgraduate degrees – than those who have not completed college. Biden is named the first choice among comparable shares of Democrats regardless of educational attainment. 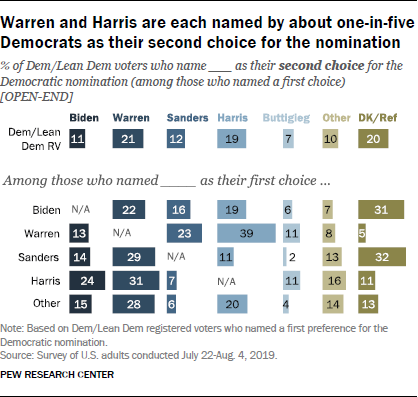 The largest share of Biden and Sanders supporters did not name a second-choice candidate (31% and 32% respectively). 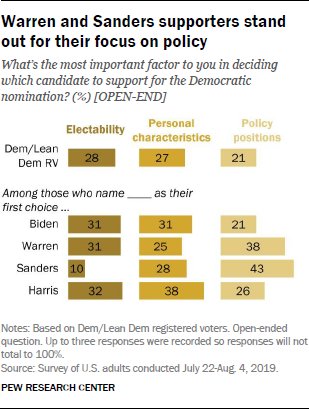 Among Biden supporters, identical shares say electability and the candidate’s personal characteristics (31% each) are the most important factors in determining their vote, while 21% say it is the candidate’s policy positions.

At this point, the leading Democratic candidates have strikingly different demographic coalitions. For example, only 5% of Biden’s supporters are under 30; among Sanders’ supporters, 34% are under 30. 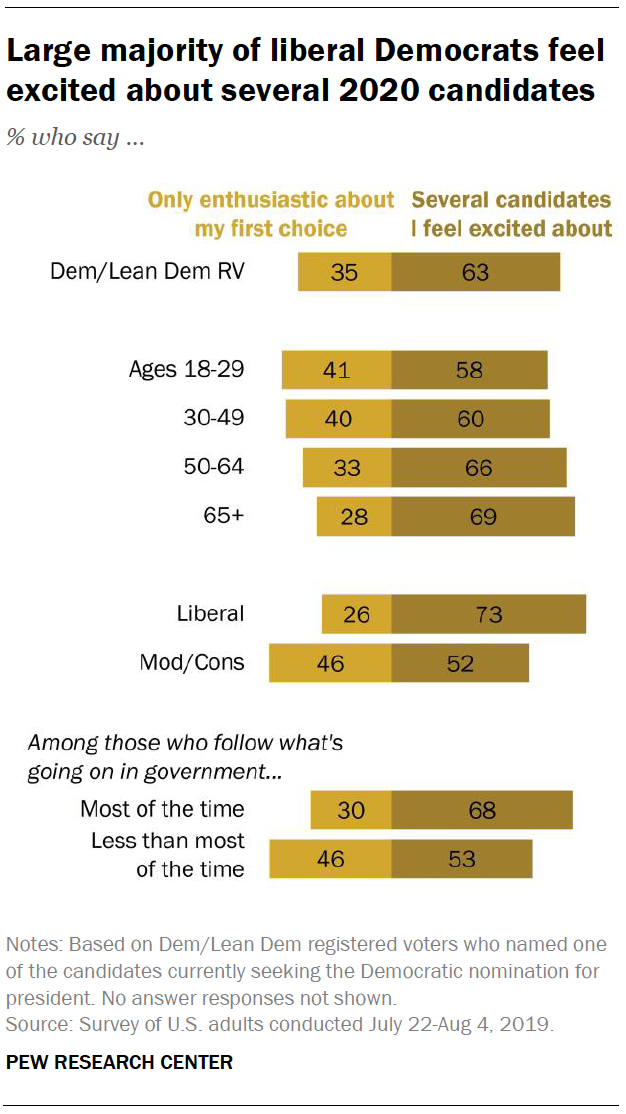 None of the candidates stand out in terms of the gender balance of their supporters. At this early point in the campaign, 30% of Democratic women voters express no preference for the nomination.

Overall, 63% of Democratic voters say there are several candidates they feel excited about. Liberal Democrats (73%) are more likely to express this view than are conservative and moderate Democrats (52%). And while about two-thirds of Democrats who say they follow government affairs most of the time (68%) say they are excited about several candidates in the Democratic field, only about half of those who follow government less closely (53%) say the same.

Americans show little change in their approval of Donald Trump in recent months: 40% say they approve of the way Trump is handling his job as president, while 59% disapprove.

The patterns in support for Trump also have not changed much. More men (44%) than women (36%) approve of Trump’s job performance, though majorities of both men and women disapprove.

Sizeable majorities of blacks and Hispanics continue to disapprove of the way Trump is handling his job as president (89% and 79%, respectively). Whites remain closely split, with 51% in approval and 48% in disapproval.

Majorities of Catholics, black Protestants, and the religiously unaffiliated disapprove of the way Trump is handling his job as president. Black Protestants show particularly strong disapproval (90%).

Just prior to the 2016 presidential election, the public had low expectations for a Trump presidency. Today, nearly three years after he took office, evaluations of his performance in several specific areas are largely negative. 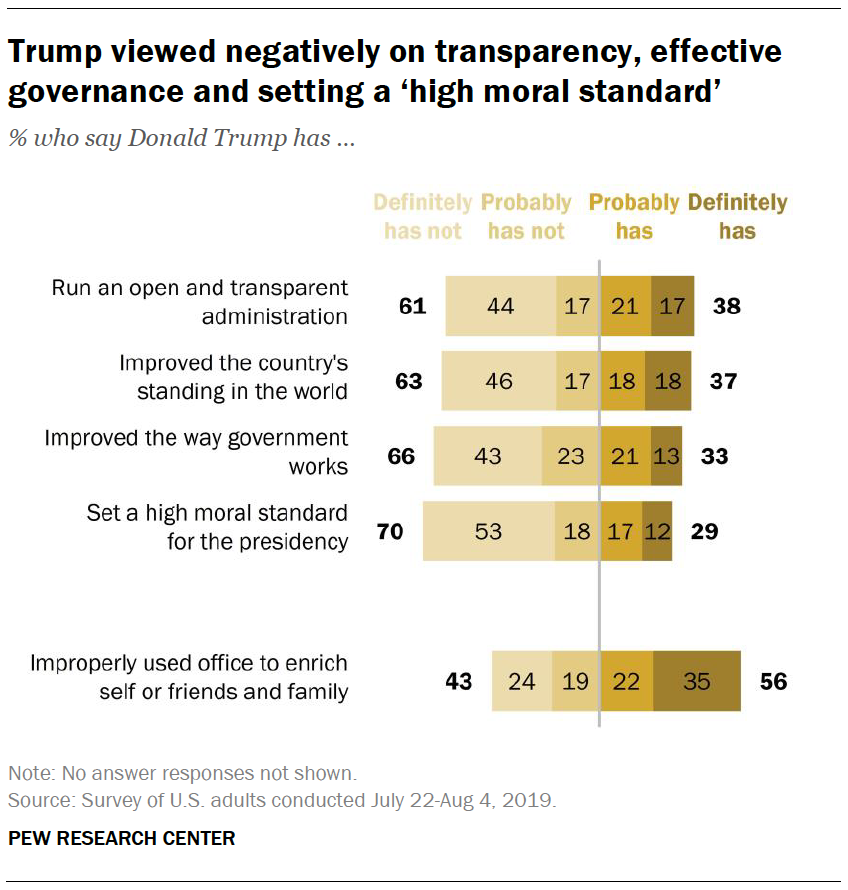 Majorities say Trump definitely or probably has not set a high moral standard for the presidency (70% say this), improved the way government works (66%), improved the country’s standing around the world (63%) and run an open and transparent administration (61%).

In addition, 56% say Trump has definitely or probably used his office to enrich himself, or his friends and family.

As in the past, these attitudes are deeply divided along partisan lines. Among Democrats, about 80% or more give Trump negative ratings on every item included in the survey.

There is somewhat more variance in Republicans’ views. While three-quarters of Republicans say Trump has run an open and transparent administration (75%) and improved U.S. standing around the world (72%), a smaller majority (57%) say he has set a high moral standard for the presidency. And while most Republicans say Trump has not improperly used the office of the presidency to enrich himself or others, 23% say he definitely or probably has done this. 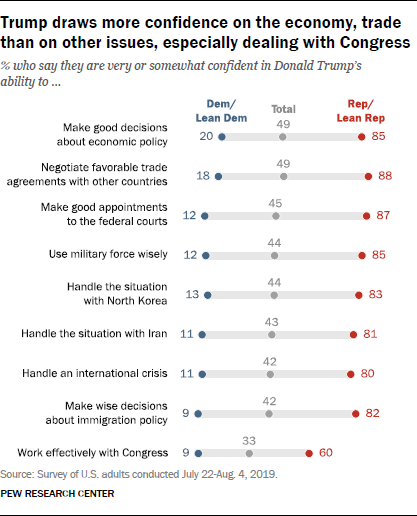 Trump continues to engender more confidence in his handling of the economy and trade than other issues, especially dealing with Congress.

About half of Americans say they are very or somewhat confident in Trump’s ability to deal with the economy (49%) and negotiate favorable trade agreements (also 49%). Fewer express confidence in Trump on making good appointments to federal courts, dealing with foreign policy issues or making wise decisions on immigration. And just a third say they have confidence in Trump to work effectively with Congress.

These views, like other evaluations of Trump, are divided by partisanship. Democrats express little or no confidence in Trump across most areas, but about one-in-five are at least somewhat confident in his ability on economic policy (20%) and trade agreements (18%).

Among Republicans, 80% or more express confidence in Trump on all issues, with one exception. A smaller majority (60%) is very or somewhat confident in his ability to work effectively with Congress.