Neither party has an edge in favorability among the public

Most Americans continue to say that it would be “too risky” to give the nation’s presidents more power, but the share expressing this opinion has declined since last year, with most of the change coming among Republicans.

Currently, 66% of the public says “it would be too risky to give U.S. presidents more power to deal directly with many of the country’s problems.” About three-in-ten adults (29%) offer the contrasting opinion that “problems could be dealt with more effectively if U.S. presidents didn’t have to worry so much about Congress or the courts.” In March 2018, 76% of the public said it would be too risky to give presidents more power. 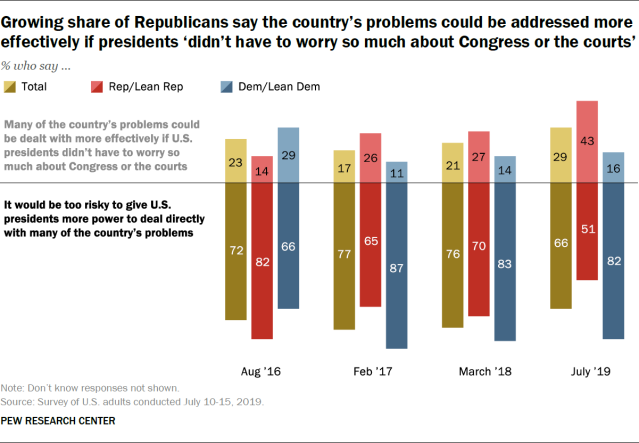 The survey by Pew Research Center, conducted July 10-15 among 1,502 adults, finds that Republicans’ views on this question have changed markedly since last year. About half of Republicans and Republican-leaning independents (51%) now say it would be too risky to give presidents more power, down from 70% last year.

The share of Republicans who say presidents could operate more effectively if they did not have to worry so much about Congress and the courts has increased 16 percentage points since then, from 27% to 43%.

Democrats’ views are virtually unchanged over the past year: Currently, 82% say it would be too risky to give presidents more power, while just 16% say presidents could be more effective with less concern over Congress and the courts.

Opinions about presidential power shifted among members of both parties following Donald Trump’s election. The share of Democrats saying it would be too risky to expand presidential power increased by more than 20 percentage points (from 66% in 2016 to 87% in 2017); Democrats’ views have remained fairly steady since then. Republicans moved in the opposite direction; the share saying it would be too risky fell from 82% in 2016 to 65% in 2017. Their views remained at about that level in 2018 (70%) before declining again this year.

The survey also finds that the public’s views of Congress and the political parties have changed modestly since last year: 36% have a favorable opinion of Congress, compared with 30% in March 2018. Americans now have identical opinions about the Republican and Democratic parties: 45% view each party favorably. These views have changed little since January, but Democrats held a 10-point edge over the GOP in public perception last September (53% to 43%). 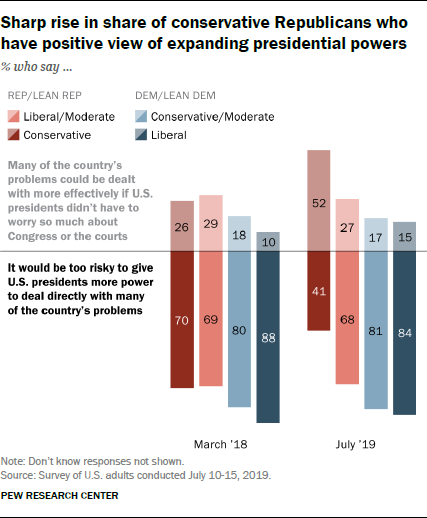 Conservative Republicans have much more positive views of increased presidential power than a year ago. By contrast, opinions among moderate and liberal Republicans are virtually unchanged.

Moderate and liberal Republicans’ views on checks on presidential power have not shifted during this period. Currently, 27% of moderates and liberals say presidents would be more effective if they were less concerned about the courts and Congress, while a 68% majority say it would be too risky to give them more power.

Among the public overall, younger adults are more likely than older people to say that expanding presidential power would be risky. Nearly three-quarters (74%) of adults under 50 view an expansion of the president’s power as too risky, compared with 58% of those 50 and older.

In addition, 80% of those with at least a four-year college degree say it would too risky to give presidents more power, while a smaller majority of those who have not completed college (60%) say this. 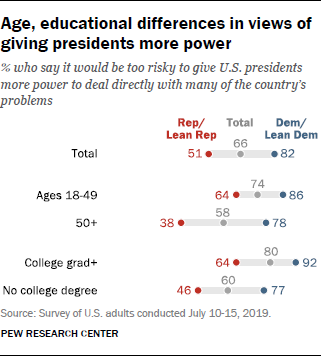 While age differences in these views are seen in both parties, they are more pronounced among Republicans than Democrats.

Among members of both parties, college graduates are more likely than those who have not completed college to say it would too risky to expand presidential power.

Favorability ratings of Congress and the parties

Just over a third of Americans (36%) say they have favorable view of Congress, while 59% view Congress unfavorably. Since 2017, congressional favorability has been somewhat higher than it had been in earlier in this decade. 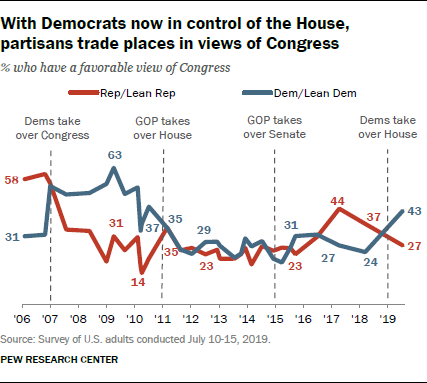 Democratic favorability of Congress is now at its highest point since the party last held the House in 2010. 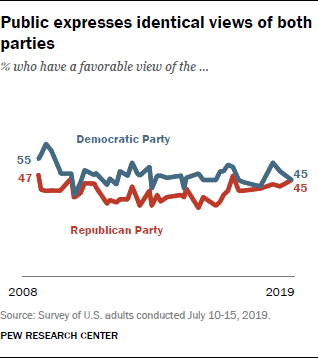 Currently, 45% of the public has a favorable opinion of the Republican Party, while 52% view the GOP unfavorably. Opinions about the Democratic Party are the same (45% favorable, 52% unfavorable).

These opinions are little changed since January, but last September, 53% Americans viewed the Democratic Party favorably, while fewer (43%) had a favorable impression of the Republican Party.