Most Republicans – and half of Democrats – rate their personal finances positively 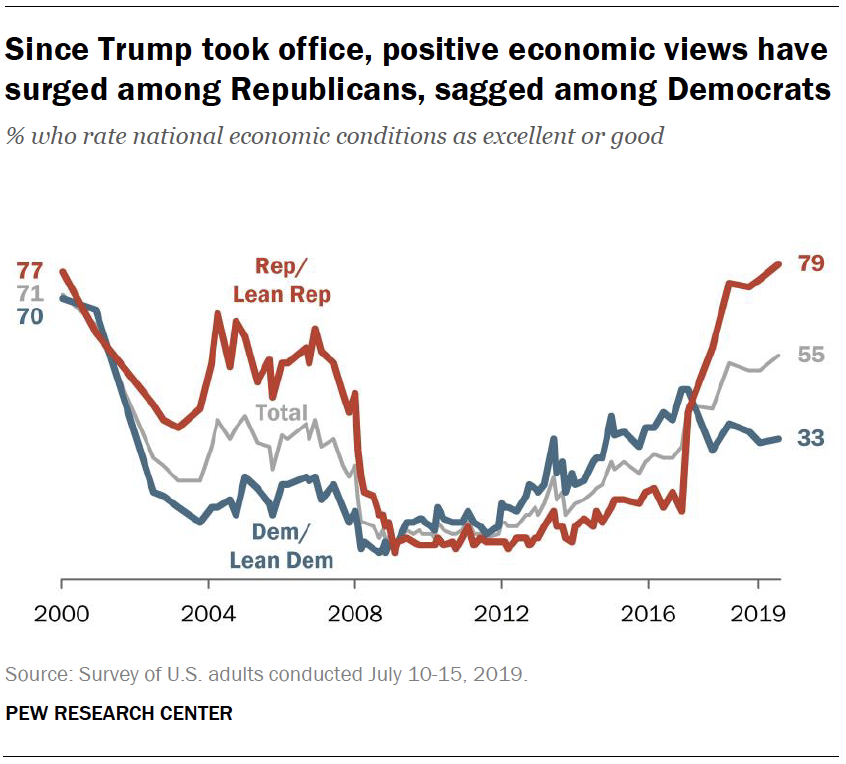 Americans continue to have positive views of the nation’s economy, according to a new Pew Research Center survey.

The survey by Pew Research Center, conducted July 10-15 among 1,502 adults, finds that Americans also are generally upbeat about their personal finances: 55% now characterize their personal financial situation as excellent or good, among the highest shares saying this in surveys conducted over the past 15 years.

As has been the case since Donald Trump took office, views of the national economy are deeply divided along partisan lines. In fact, the increase in positive economic views since early 2017 has come almost entirely among Republicans and Republican-leaning independents. 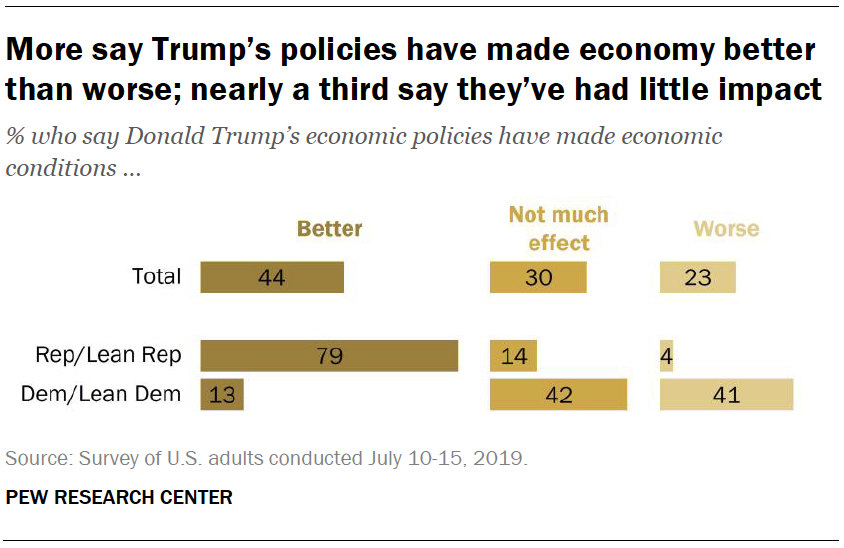 As was the case in January, far more Americans say Trump’s economic policies have made U.S. economic conditions better (44%) than worse (23%), while 30% say they have not had much of an effect. These attitudes – like views of the economy itself – are divided by partisanship.

Republicans making $75,000 per year or more are substantially more likely than those who make less than $30,000 to say that Trump’s policies have improved the economy (88% vs. 59%). Democrats’ views of Trump’s economic policies do not differ much across income categories.

At a similar point in 2011 – when overall assessments of the economy were much less positive than they are today – somewhat more Americans said Barack Obama’s policies had made economic conditions worse (34%) than better (27%), with 33% saying they had not had much of an effect. 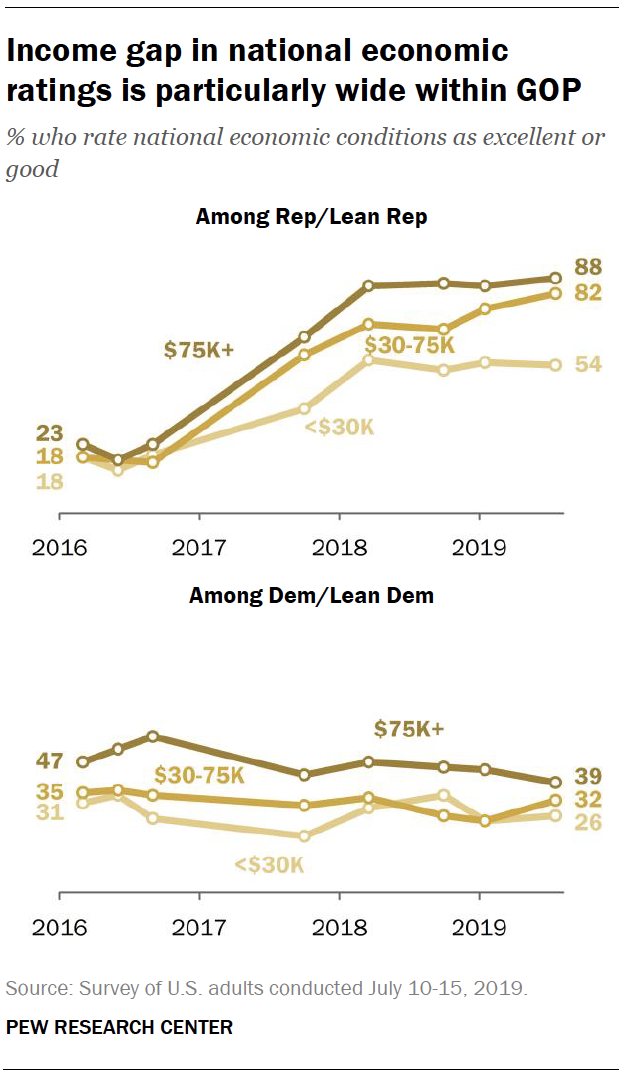 Views of the economy are associated with income – especially among Republicans and Republican leaners. Overall, 63% of Americans with family incomes of $75,000 or more say the economy is excellent or good, but just 36% of those with incomes of less than $30,000 say the same.

The income gap in perceptions of the economy among Republicans has grown considerably in recent years: In the fall of 2016, there were only modest differences in GOP ratings of the economy across income groups.

Among Democrats, the income gap in economic perceptions is more modest: About four-in-ten Democrats and Democratic leaners with family incomes of $75,000 or more (39%) say the economy is excellent or good; 26% of Democrats who make less than $30,000 say the same.

Across all income groups, Democrats’ ratings of the nation’s economy are little changed over the past several years. 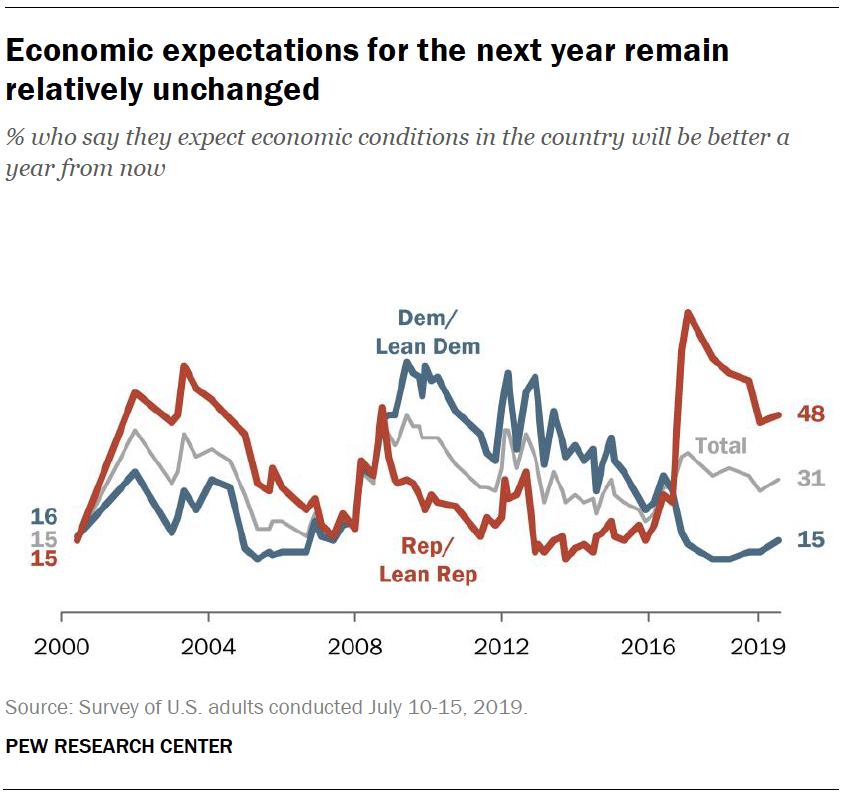 Looking forward, about three-in-ten Americans (31%) say economic conditions will be better a year from now. One-in-five (20%) say they expect things will be worse, and about half (47%) say conditions will be the same. The public’s economic outlook has changed little over the past two years.

Republicans are much more optimistic about the country’s economic future. About half (48%) say they expect economic conditions will be better a year from now, compared with only 15% of Democrats.

Majority of Americans view their own finances positively 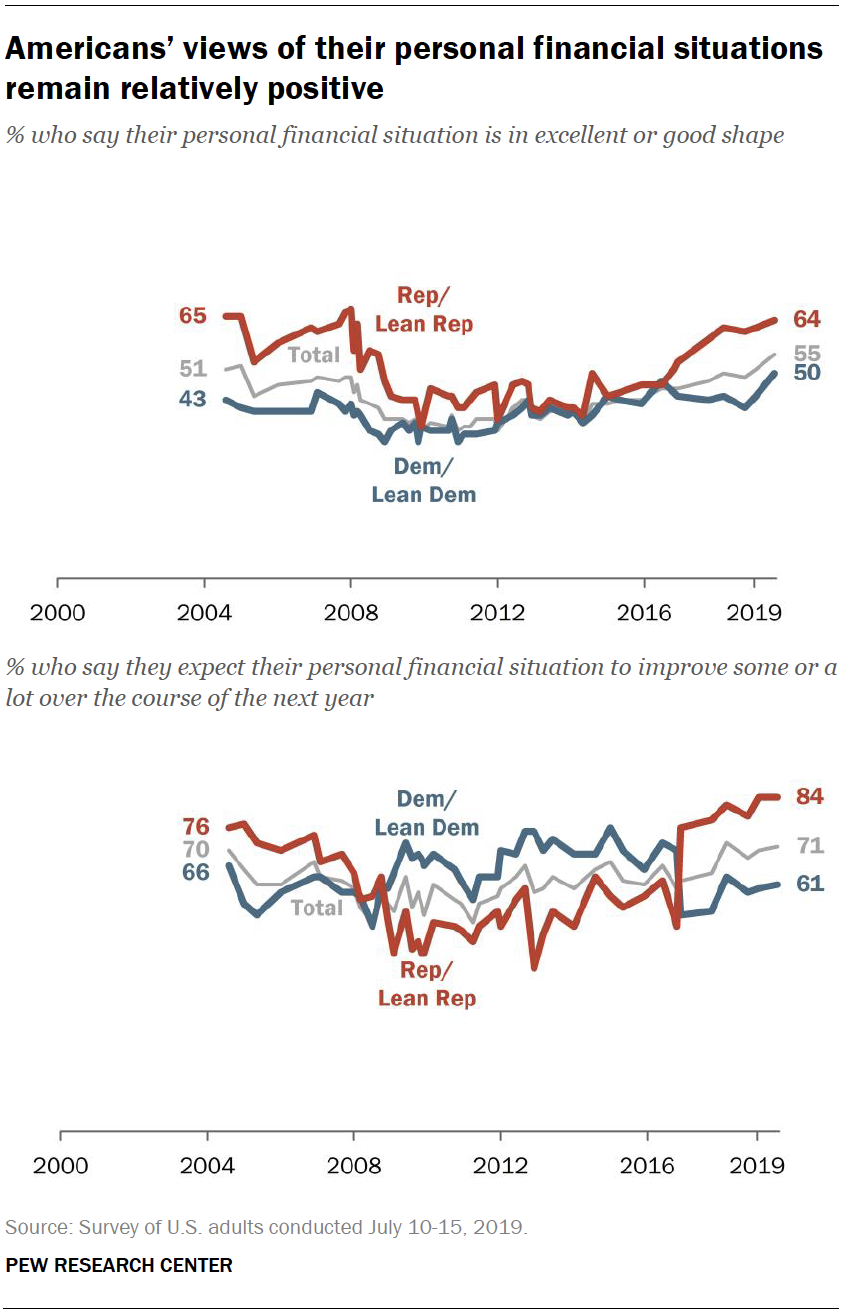 Nearly two-thirds of Republicans (64%) say their personal finances are in excellent or good shape, compared with 50% of Democrats.

Most Americans (71%) expect their personal finances to improve a lot (14%) or some (57%) over the course of the next year. Only 15% say they expect their finances to get worse, while 11% volunteer that they will remain about the same.

Republicans also are more likely than Democrats to express optimism about their personal finances: 84% say they think their finances will get better over the next year, compared with 61% of Democrats.