2. Reactions to the midterm elections 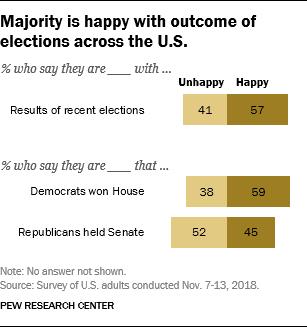 In the wake of last week’s election, 57% of Americans say that – all in all – they are happy with the results; 41% say they are unhappy. 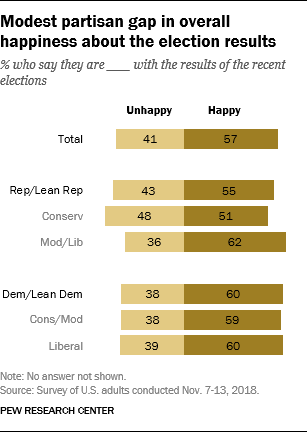 There is only a modest partisan gap in overall reactions to the outcome of the election: 60% of Democrats and 55% of Republicans say they are happy with the overall outcome.

But conservative Republicans offer somewhat less positive overall evaluations of the election than other partisan and ideological groups: 51% are happy, while a similar share (48%) are unhappy. 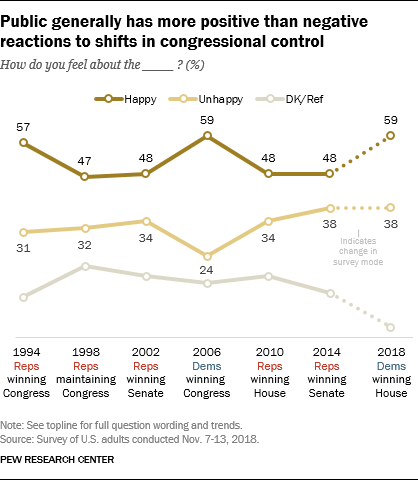 In evaluations of midterms since 1994, the public has generally been more happy than unhappy about a change of power in a congressional chamber. This pattern holds true for the 2018 election.

As in the past, an overwhelming majority of those who back the party that has regained control of a chamber express happiness about this: 91% of Democrats and Democratic leaners say they are happy about their party winning the House. About three-quarters of Republicans and Republican leaners (77%) are unhappy about this change.

Conversely, while 87% of Republicans and Republican leaners are happy the GOP maintained control of the Senate, almost the same share of Democrats (86%) are unhappy about this. 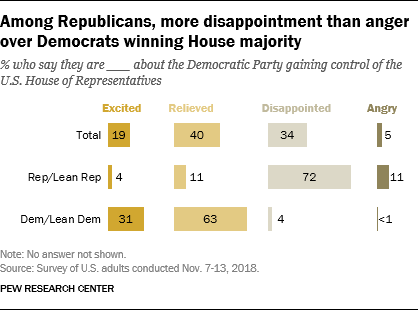 Overall, 40% of Americans say they are relieved about the Democratic Party gaining control of the House; slightly fewer 34% say they are disappointed. And while about two-in-ten (19%) say they are excited, just 5% say they are angry about this outcome.

A 63% majority of Democrats and Democratic leaners say they are relieved by their party’s victory in congressional races; about a third (31%) express excitement that their party is back in the majority in the House. And few Democrats say they are disappointed (4%) or angry (less than 1%) about this development.

Most Americans know Democrats will have House majority 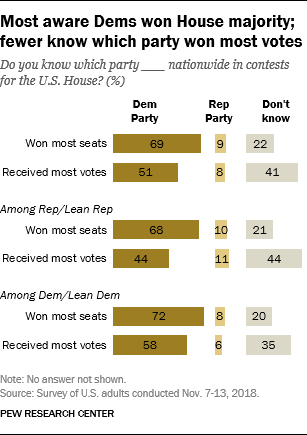 About seven-in-ten Americans (69%) know that the Democratic Party won the most seats nationwide in this month’s elections for the House of Representatives, while 22% say they don’t know which party won more seats. There is far less certainty about which party won the most votes nationwide for the House: About four-in-ten (41%) say they do not know, while about half (51%) know more votes for Congress were cast for Democratic candidates than for Republican candidates.

Republicans (68%) and Democrats (72%) are about equally likely to know who will control the House in January, while Democrats (58%) are more likely than Republicans to know Democratic candidates received more votes nationwide (44%).

Majority says 2018 was more about issues compared with past elections 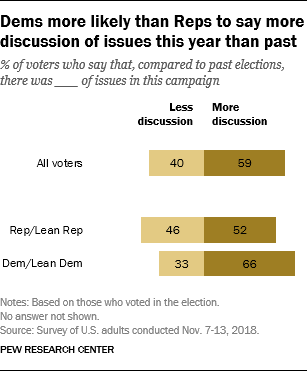 Next: 3. Confidence in vote count and election administration Next Page → ← Prev Page