For the most part, Democrats are driving the recent shift in opinions about the social safety net in a more liberal direction. For instance, the share of Democrats who say the government should do more to help the needy, even if it means going deep into debt, has increased dramatically since 2011, returning to levels last seen in 2008. Republicans’ positions on these questions have changed little over the last several years, but reflect a long-term GOP shift in a conservative direction.

As has been the case for most of the past two decades, a majority of the public continues to view government as “almost always wasteful and inefficient.” Opinions remain divided on whether government regulation of business is necessary to protect the public interest.

Just 25% of Republicans say poor people have hard lives because government benefits do not go far enough to help them live decently; more than twice as many (65%) say “poor people have it easy because they can get government benefits without doing anything in return.” Republicans’ attitudes on this measure have shown relatively little change in recent years, though a somewhat greater share of Republicans (around four-in-ten) said the poor had hard lives just over a decade ago (from 2003 to 2005). 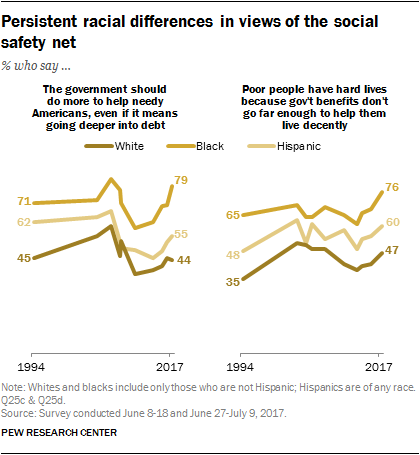 Since 1994, there have been consistent differences in opinion by race about government benefits for the poor. In the current survey, 76% of blacks say poor people have hard lives because government benefits do not go far enough. That compares with 60% of Hispanics and only 47% of whites who say this.

Most continue to view government as ‘wasteful and inefficient’ 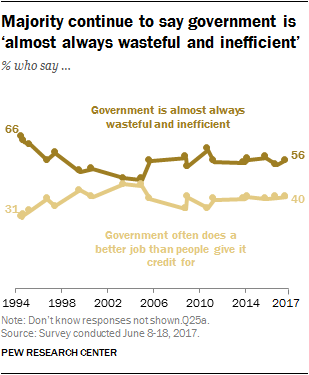 For much of the past two decades, majorities have viewed the government as wasteful and inefficient. The share expressing this view hit a high point in October 1994 (66%), a month before that year’s midterm elections. 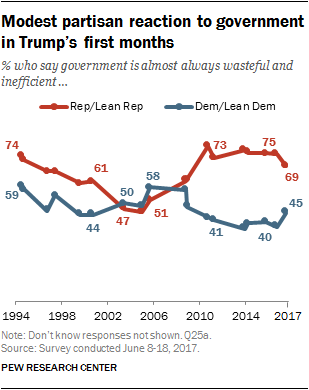 Currently, 69% of Republicans and 45% of Democrats say government is wasteful and inefficient. These views have changed only modestly from 2015, when Republicans were somewhat more likely (75%), and Democrats somewhat less likely (40%), to express this view.

In recent decades, partisan views on this question have shifted somewhat in response to the party of the administration. During the Bush administration, Republicans held a less negative view of governmental efficiency, while Democrats were more critical than during Democratic administrations. In September 2005, for example, 58% of Democrats said government was wasteful and inefficient, compared with 51% of Republicans. 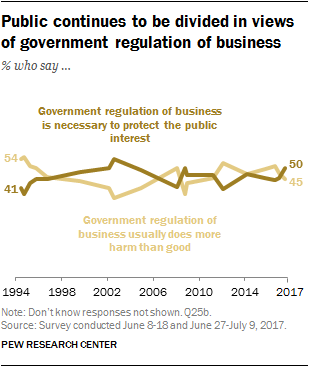 As with views of government aid to the poor, Democrats’ opinions about the necessity of government regulation of business have moved in a more liberal direction. 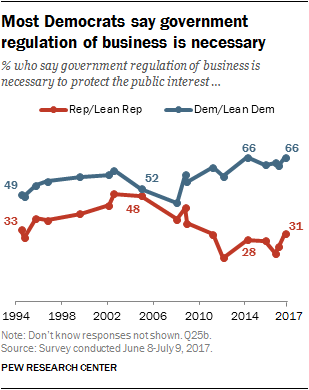 Americans continue to be more likely to say that this country has been successful more because of its “ability to change” (52%) than its “reliance on long-standing principles” (43%). Views on this question are little changed since it was last asked in 2015.

Americans younger than 50 are more likely than older adults to credit the country’s success to its ability to change: 60% say this, compared with 43% among those 50 and older.