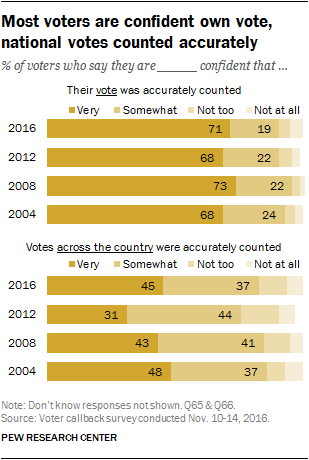 A majority of voters say they are confident their own vote was accurately counted in the election, though fewer are confident in the accurate counting of votes across the country. This pattern is little changed from recent presidential elections.

Overall, 90% of voters say they are at least somewhat confident their own vote was accurately counted, including fully 71% who are very confident. Few (9%) are not too or not at all confident their vote was counted.

There are no differences in confidence between voters who cast their ballot on Election Day and those who voted early.

Voters are slightly less likely to be at least somewhat confident votes across the country were accurately counted (82%), and fewer than half of voters (45%) say they are very confident about this. 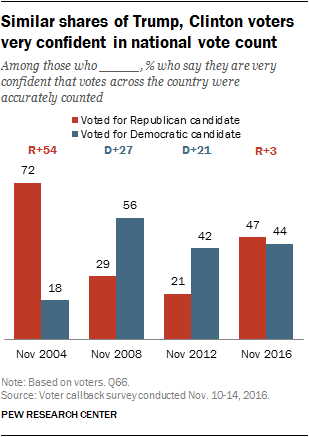 In 2004, fully 72% of Bush voters were very confident in the national vote count; just 18% of Kerry voters said the same. 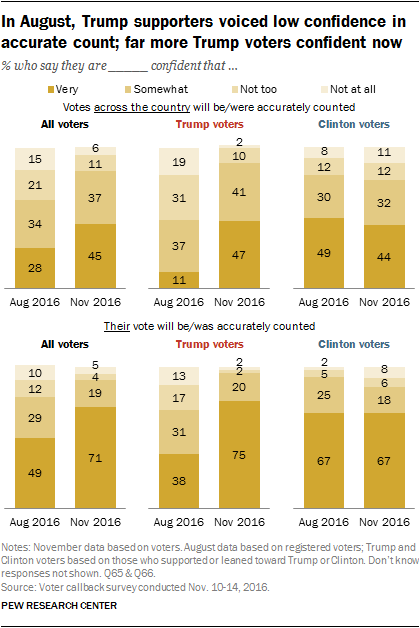 Voters express more confidence about the vote count now than they did earlier in the campaign cycle. In August, about six-in-ten registered voters were very (28%) or somewhat (34%) confident that votes across the country would be accurately counted; 82% of those who voted say this now.

The views of Clinton voters on this question are little different than they were in the summer: In August, 79% of Clinton supporters were very or somewhat confident votes across the country would be counted accurately, including about half (49%) who were very confident. Today, 76% of Clinton voters are at least somewhat confident votes across the country were accurately counted, including 44% who are very confident.

Voters experience at the polls 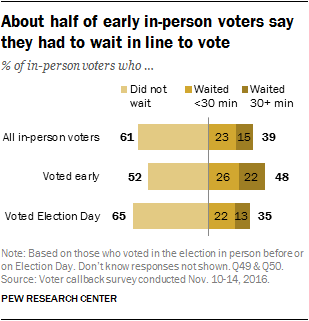 Among all in-person voters, 39% reported having to wait in line to vote, while a majority (61%) did not have to wait. Nearly a quarter of all voters (23%) waited less than 30 minutes, while 15% waited longer.

Most voters knew who they were voting for before the debates 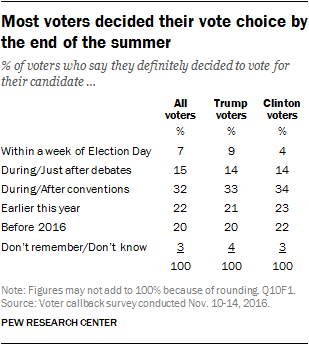 Voters’ reports of when they made their decision between the candidates vary little between Trump and Clinton voters and are similar to past elections without an incumbent president.