The analysis of changes in party identification over time is based on a compilation of 253 surveys and over 340,000 interviews among registered voters conducted by the Pew Research Center from January 1992 to August 2016. These surveys are combined into one large data file that can be sorted according to a range of demographic characteristics, with comparisons made across different time periods. Yearly totals are calculated by combining all surveys for the calendar year, with appropriate weights applied. The table below shows the number of surveys and interviews conducted each year as well as the margin of error for each yearly sample. 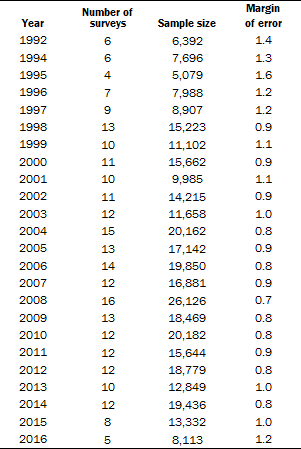 Next: Appendix A: Religious category definitions Next Page → ← Prev Page