Hillary Clinton’s favorability ratings have fluctuated substantially throughout her more than two decades in public life. Her ratings today are at the lowest level since her last presidential race in 2008. Read the report →

Milestone in Hillary Clinton's career. Click or mouseover to see the specific event 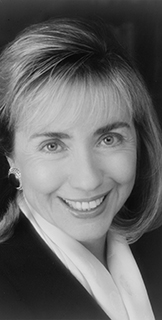 (May 1993) Clinton becomes first lady and she and her husband enjoy a warm reception from the public.

"Positive reviews of Hillary Clinton's job performance run well ahead of evaluations made of the President… Women under 30 years of age were especially positive about Mrs. Clinton, with seven in ten expressing approval."

"While many Americans (48%) think that charges of possible misconduct leveled against Hillary Clinton are politically based, the first lady’s public image has nonetheless suffered. Currently, unfavorable opinions outweigh favorable views of Mrs. Clinton by a margin of 54% to 42%."

"In contrast to her husband, Hillary Clinton continues to draw high marks from the public. Two-thirds of Americans (66%) say they admire Hillary Clinton’s decision to stand by her husband and nearly as many (63%) have a favorable opinion of the First Lady." 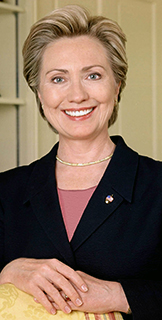 (Dec. 2006) Following her re-election, Clinton's favorability remained strong. Among Democrats, 55% viewed her as the leader of the party.

“More than eight-in-ten Democratic voters (83%) and 56% of independents express a positive opinion of Sen. Hillary Clinton, but just 20% of Republicans agree.…Hillary Clinton continues to be named more often than anyone else as the leader of the Democratic Party these days, though the plurality response offered by three-in-ten Americans is that 'nobody' leads the party.”

(May 2008) Clinton’s overall favorability dips below 50% again after long primary season that creates divisions even among many Democrats.

"Currently, about as many [Obama supporters] express a positive opinion of Clinton as express a negative opinion (49% vs. 48%). In February, favorable assessments of Clinton outnumbered unfavorable views by nearly two-to-one (64% to 33%) among Obama’s backers. … Obama’s supporters – by greater than two-to-one – believe that the continuing race is bad for the party rather than good for the party (61% vs. 27%)." 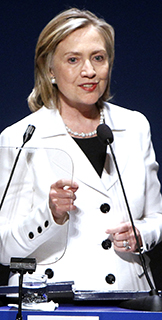 (Dec. 2012) As Clinton's tenure with the State Department drew to a close, she was embroiled in controversy over the department’s failure to adequately address the security needs of the U.S. consulate in Libya. While her popularity matched other high points in her career it fell to 56% several months after she stepped down from the position.

(Oct. 2013) For the first time in years, Clinton was out of government. But she acknowledged she was contemplating a second bid for the White House. In an Oct. 2013 speech to a business group on Long Island, Clinton said she wanted to “think seriously” about a 2016 campaign, but said she wouldn’t begin thinking about a possible second run until the following year.