The Pew Research Center’s June 12 report on political polarization in America found that the right and left have very different ideas about aspects of life beyond day-to day politics, such as the ideal features of a community and the types of people they would welcome into their families.

The typology study also demonstrates wide ideological differences in feelings of patriotism, views about the country’s future, religious beliefs and practices, and even leisure activities and daily habits. The typology groups also vary widely by demographics. (See the detailed demographics table at the end of this section.) 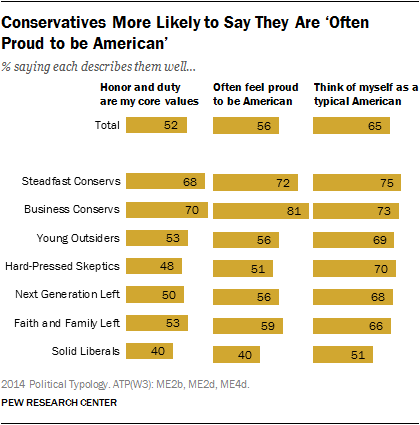 Feelings of pride in being American – and a belief that honor and duty are core values – are much more widespread among the two conservative groups than the other typology groups.

Overall, 81% of Business Conservatives and 72% of Steadfast Conservatives say the phrase “often feel proud to be American” describes them well. These are by far the highest percentages across typology groups. Smaller majorities of the Faith and Family Left (59%), Next Generation Left (56%) and Young Outsiders (56%) say they often feel a sense of pride in being American.

In addition to high levels of patriotism, the groups on the right also are most likely to say they have a sense of honor and duty. About seven-in-ten Business Conservatives (70%) and Steadfast Conservatives (68%) say the phrase “honor and duty are my core values” fits them. Far fewer in the other typology groups, including just 40% of Solid Liberals, say this description applies well to them.

Most Describe Themselves as Compassionate, Trusting

A large majority of Americans (74%) say the phrase “compassion and helping others are my core values” describes them well. This description is embraced by majorities across all typology groups, though Solid Liberals (82%) are the most likely to say it applies to them.

Most Americans (65%) also view themselves as trusting. The proportion saying this ranges from 57% (among Steadfast Conservatives) to 70% (among Hard-Pressed Skeptics). 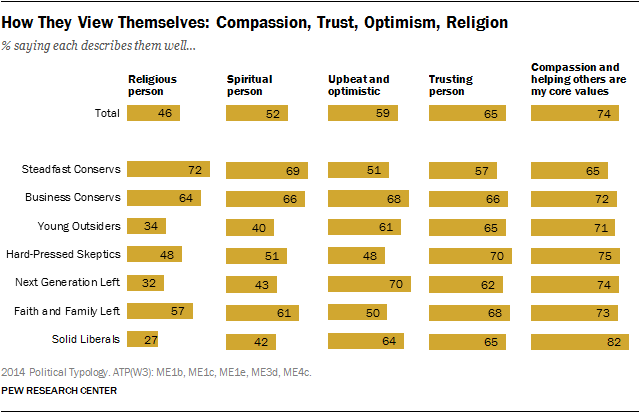 There are greater differences in people’s perception of whether they are religious and spiritual. Overall, 46% say they are “religious,” while slightly more (52%) say they are “spiritual.”

As might be expected, the highly religious typology groups – Steadfast Conservatives, Business Conservatives and the Faith and Family Left – are most likely to say both of these descriptions apply to them.

The typology groups also express somewhat different attitudes about the future, reflecting, in part, their political beliefs and financial circumstances.

Steadfast Conservatives, who are much better off financially than these two groups, also are relatively gloomy: 51% describe themselves as upbeat and optimistic. A positive outlook is most prevalent among the affluent Business Conservatives (68%) and the Next Generation Left (70%). Most Solid Liberals (64%) and Young Outsiders (61%) also describe themselves as upbeat and optimistic.

The Democratic-leaning Faith and Family Left are as likely as Steadfast Conservatives to be affiliated with a religion (just 7% are unaffiliated), but fewer are white evangelical Protestants and somewhat more identify as Catholic.

Solid Liberals are the least religious group – 41% are not affiliated with a religion; 10% describe themselves as atheists, 9% say they are agnostic and 22% say they are “nothing in particular.” 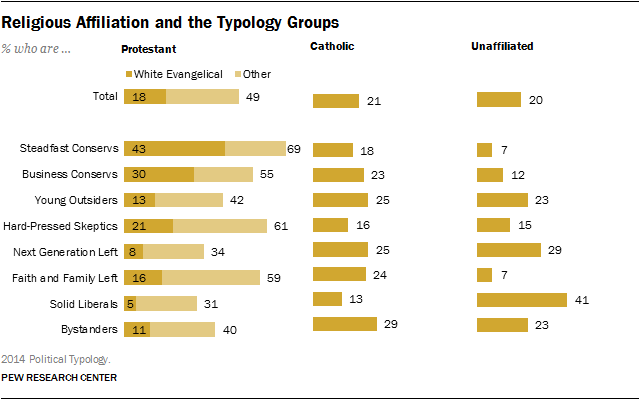 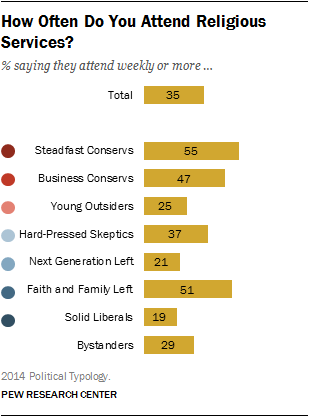 Most Steadfast Conservatives regularly attend religious services. Overall, 55% say they attend weekly or more. The Faith and Family Left are nearly as likely to go to religious services at least once a week (51%).

Many Business Conservatives also regularly attend services: 47% go at least once a week, compared with 35% of the public as a whole.

Only about two-in-ten of the Next Generation Left (21%) and Solid Liberals (19%) go to religious services weekly, making them the two typology groups least likely to be regular attenders.

Who Feels Financially Stressed, Who Has Money in the Market? 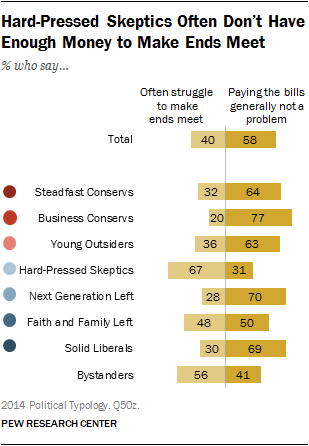 The financial challenges facing the Hard-Pressed Skeptics, who have the lowest family incomes of the main typology groups, are shown by the large majority (67%) who say: “I often don’t have enough money to make ends meet.” That is by far the highest percentage of any typology group; even among the young struggling Bystanders, fewer (56%) say they routinely face financial shortfalls.

Notably, typology groups on both the right and left feel relatively comfortable financially. Nearly eight-in-ten Business Conservatives (77%) and 64% of Steadfast Conservatives, as well as large majorities of the Next Generation Left (70%) and Solid Liberals (69%), say “paying the bills is generally not a problem for me. 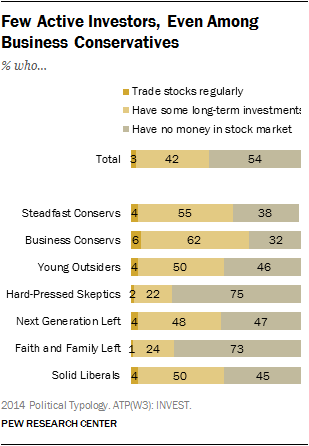 Slightly more than half of Solid Liberals (55%), Young Outsiders (54%) and the Next Generation Left (52%) say they have at least some long-term investments in the stock market.

A majority of Americans (57%) say the phrase “outdoor person” describes them well, and this is true across six of the seven major typology groups; Solid Liberals (44%) are less likely than the other groups to say this description fits them well. And just 12% of Solid Liberals say the phrase “hunter, fisher or sportsman” describes them well. That also is the lowest percentage among typology groups.

Interest in sports and video games also differs across typology groups. Business Conservatives (44%) and Young Outsiders (41%) are more likely than Hard-Pressed Skeptics (30%) or Solid Liberals (32%) to say they are sports fans. And Steadfast Conservatives – the oldest of the typology groups – are less likely than those in almost all of the other groups to say the phrase “computer and video gamer” describes them 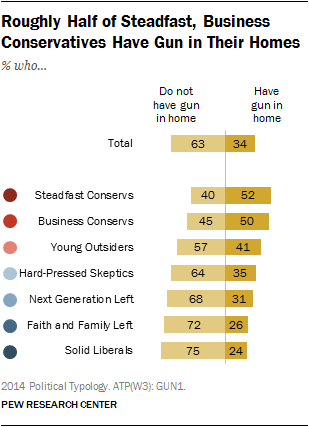 There also are wide differences across typology groups in reported gun ownership: About half in each of the two conservative groups say they have a gun, rifle or pistol in their homes (52% of Steadfast Conservatives, 50% of Business Conservatives).

Gun ownership also is relatively common among the Young Outsiders, who express liberal views on many social issues, but are supporters of gun rights (See Section 2). About four-in-ten (41%) Young Outsiders have a gun in their homes.

Only about a quarter of the Faith and Family Left (26%) and Solid Liberals (24%) have guns in their homes – roughly half the share of the two conservative groups.

Use of Public Transportation; Recycling and Reusing 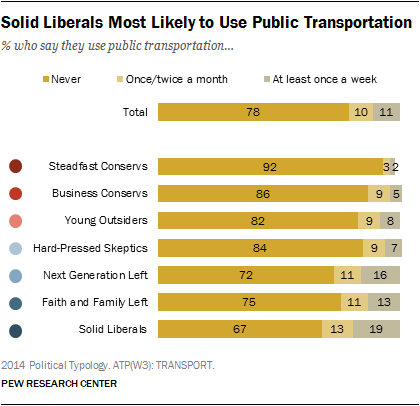 By contrast, 92% of Steadfast Conservatives say they never use public transportation in a typical month. 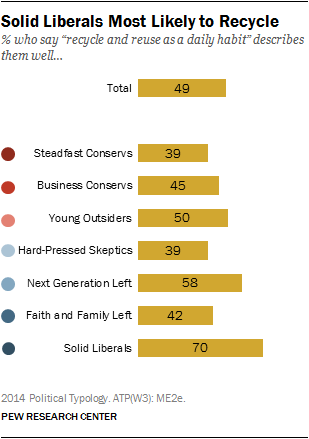 Nearly half of Americans (49%) say the phrase “recycle and reuse as a daily habit” describes them well; about as many (51%) say this does not describe them.

Solid Liberals are the most likely to describe recycling and reuse as part of their daily habits, seven-in-ten (70%) do this, along with 58% of the Next Generation Left.

Recycling is practiced less across most of the other typology groups. Only about four-in-ten Steadfast Conservatives (39%), Hard-Pressed Skeptics (39%) and the Faith and Family Left (42%) say they “recycle and reuse as a daily habit.” 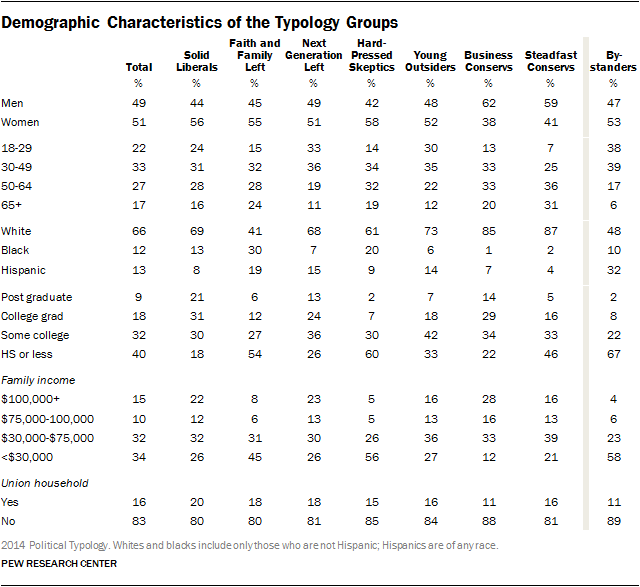