Changing Minds: Behind the Rise in Support for Gay Marriage

The rise in support for same-sex marriage over the past decade is among the largest changes in opinion on any policy issue over this time period. Fully 14% of all Americans – and 28% of gay marriage supporters – say they have changed their minds on the issue in favor of gay marriage.

Views of same-sex marriage and the percentage who... 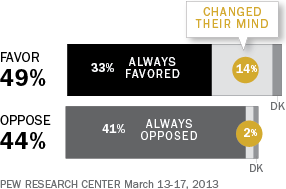 Of the 14% who changed their mind and now favor gay marriage, Pew Research asked...

What made you change your mind about same-sex marriage?

Their responses could be categorized as...

Freedom to choose/
love and happiness

Morals/religious beliefs/
only God can judge

Click a category above to see an opinion.
Numbers do not total 100% because of multiple responses.

Of the 2% who changed their mind and are now against gay marriage, respondents said...