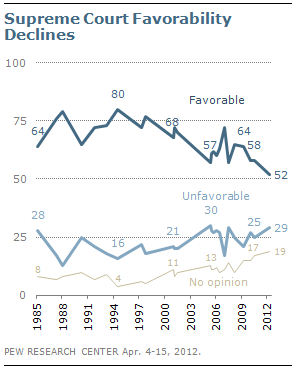 Public assessments of the Supreme Court have reached a quarter-century low. Unlike evaluations over much of the past decade, there is very little partisan divide. The court receives relatively low favorable ratings from Republicans, Democrats and independents alike. 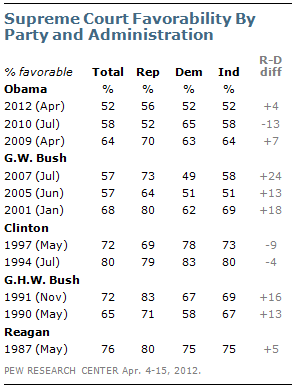 There are virtually no partisan differences in views of the Supreme Court: 56% of Republicans, and 52% of both Democrats and independents rate the Supreme Court favorably. And the decline in court ratings has occurred across party lines over the past three years. In April 2009, soon after Barack Obama took office, 70% of Republicans, 63% of Democrats, and 64% of independents held a favorable opinion of the court.

Republican ratings fell steeply between 2009 and 2010, with the appointments of Sonia Sotomayor and Elena Kagan to the court. Democratic ratings remained relatively high through 2010, but have fallen steeply since.

The Court and Health Care 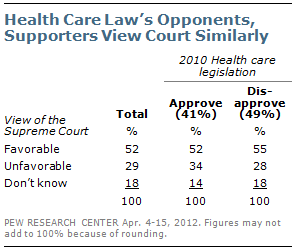 The survey was conducted after the Supreme Court’s hearings on the 2010 health care law. It finds that the law’s supporters and opponents express similar views of the court.

Overall, the public remains deeply divided over the health care law: 41% say they approve of it, while 49% disapprove. Among the bill’s supporters, 52% have a favorable view of the Supreme Court, while 34% view it unfavorably. Among the bill’s opponents, the balance is only slightly less negative; 55% favorable, 28% unfavorable.

However, a survey conducted last month found that while most Americans said the health care hearings did not change their views of the court, Democrats were far more likely than Republicans to say their opinions of the court had become less favorable. 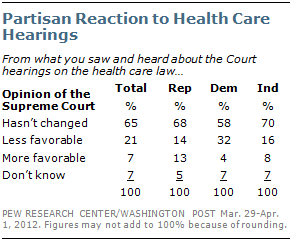