The Gender Gap: Three Decades Old, as Wide as Ever

The gender gap in presidential politics is not new. Democratic candidates have gotten more support from women than men for 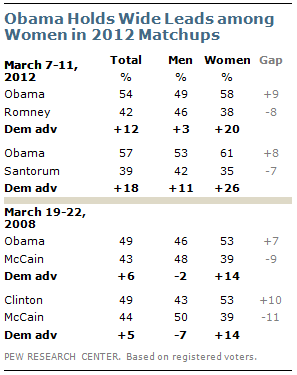 more than 30 years. Even so, Barack Obama’s advantages among women voters over his GOP rivals are striking.

In the Pew Research Center’s most recent national survey, conducted March 7-11, Obama led Mitt Romney by 20 points (58% to 38%) among women voters. It marked the second consecutive month that Obama held such a wide advantage over Romney among women (59% to 38% in February). In both February and March, Obama ran about even with Romney among men.

In the March survey, Obama’s overall lead over Rick Santorum was 18 points. Fully 61% of women voters said they would favor Obama in a matchup with Santorum, compared with just 35% who backed the former Pennsylvania senator.

The gender gap – the difference in support for a candidate among women and men – is about as wide today as it was at this point in the campaign four years ago. In March 2008, both Democratic candidates, Obama and Hillary Clinton, had narrower overall leads over John McCain than Obama has today. Obama ran about even with McCain among men, but he led by 14 points among women (53% to 39%). Clinton trailed among men, yet also led by 14 points among women. 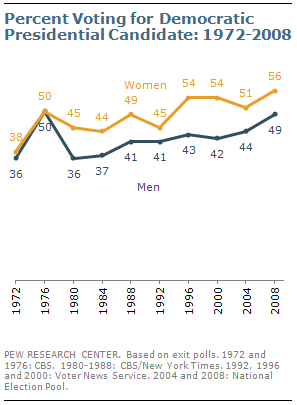 The gender gap in 2008 – the seven-point difference between women and men in support for the Democratic candidate – was comparable to the gap in most elections since 1980. Even when Democratic candidates failed to garner a majority of the women’s vote – as in 1980, 1984 and 1988 – they still drew more support from women than from men.

The election of 1992 was unusual because of Ross Perot’s popular third-party campaign. Still, the gender gap was significant: Women backed Bill Clinton over George H.W. Bush, 45% to 37%, with 17% supporting Perot. Clinton had a narrower lead among men (41% Clinton, 38% Bush); 21% of men voted for Perot, according to exit polls conducted after the 1992 election. 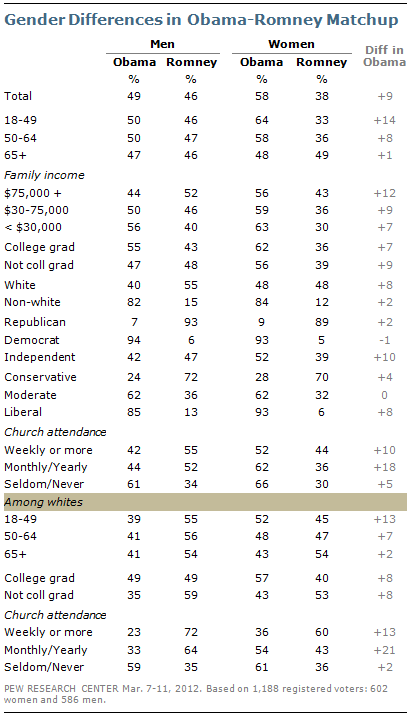 Among men, by contrast, there were no significant differences by age: Obama and Romney ran about even in all three age categories. 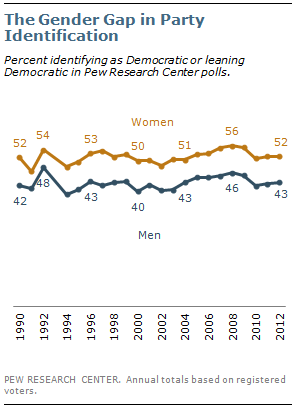 Just as women have been more likely to vote Democratic in presidential elections, a higher percentage also identifies with or leans toward the Democratic Party or lean Democratic.

In Pew Research Center polls this year, 52% of women identify with the Democratic Party or lean Democratic, compared with 43% of men. That is in line with the gender gap in party identification dating back to 1990. In 2008, 56% of women and 46% of men identified as Democrats or leaned Democratic.

Aside from a gender gap, there also is a marriage gap in party identification. In 2011, fully 62% of single women voters identified with or leaned toward the 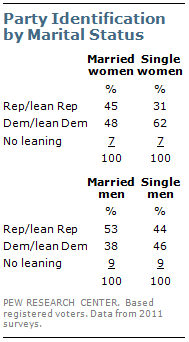 Democratic Party. Just 31% of single women voters identified with or leaned toward the GOP. 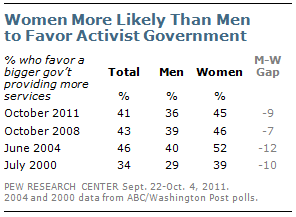 There are several clusters of issues on which men and women divide, including views of government and its role. Yet gender differences do not follow a predictable pattern. On social issues, for instance, there is a wide gender gap in views of gay marriage, but not abortion.

For more than a decade, women have been more likely than men to favor an active role for government. And recent surveys show that higher percentages of women than men say that government should do more for the poor, children and the elderly. 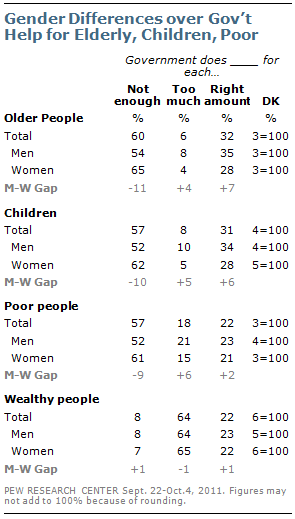 The October survey also found higher percentages of women than men saying that the government does not do enough for older people (by 11 points), children (10 points) and the poor (nine points). By contrast, there were no differences in views of how much the government does for wealthy people. Nearly identical percentages (65% of women, 64% of men) said it does too much for the wealthy.

There is not a significant gender gap on the general question of whether government regulation of business is necessary, or usually does more harm than good. However, women are far more likely than men to say that government regulations should be strengthened in a number of areas.

In February, 61% of women, but only 45% of men, said regulations on food production and packaging should be strengthened. Women also were more likely to favor stronger regulations on workplace safety and health (by 13 points) and in environmental protection (by nine points). (For more, see “Auto Bailout Now Backed, Stimulus Divisive,” Feb. 23, 2012.) 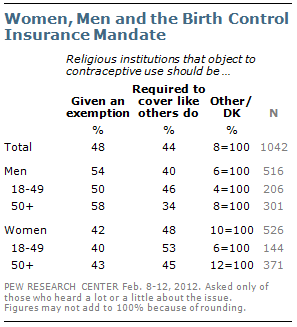 One of the recent political controversies in the social issues arena involved a proposed federal rule that would require employers, including most religiously affiliated institutions, to cover birth control as part of their health care benefits.

In February, the public was divided when asked if a waiver should be given to religiously-affiliated organizations that objected to the use of contraceptives or whether they should be required to provide coverage for birth control like other employers.  (See “Public Divided over Birth Control Insurance Mandate,” Feb. 14, 2012.)

The gender differences on this issue were relatively modest. Roughly half of women (48%) who heard about the issue said that religiously affiliated organizations that object to contraceptives should be required to cover them; 42% said they should be given an exemption from the rule. Men, by 54% to 40%, favored the exemption.

Notably, women younger than 50 were far less likely than older women to have heard about the issue. Among younger women who had heard about the issue, 53% said religious institutions should be required to cover contraceptives, while 40% said they should be given an exemption. Women 50 and older were evenly divided (45% required, 43% be given an exemption). 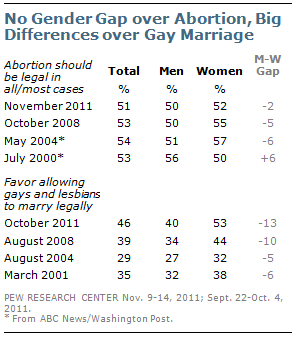 However, there is a sizable difference in women’s and men’s attitudes toward gay marriage. In an October 2011 survey, 53% of women favored allowing gays and lesbians to marry legally, while 38% were opposed. More men opposed than supported same-sex marriage (51% to 40%). 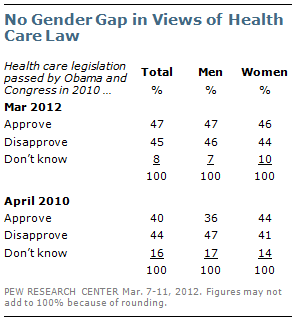 One issue on which there is virtually no gender gap is the 2010 health care law. In March, 47% of men and 46% of women approved of the health care legislation passed by Barack Obama and Congress in 201o.

There also is little difference in opinion about the health care law’s so-called individual mandate. Nearly six-in ten men (57%) and (54%) of women disapprove of the law’s requirement that all individuals be covered by health insurance or pay a penalty. 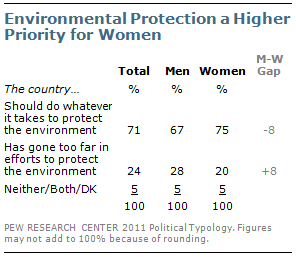 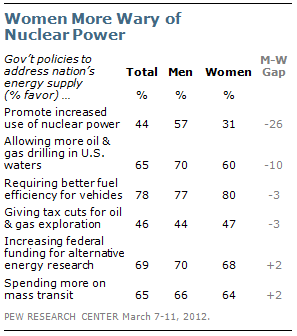 women. A larger majority of men (70%) than women (60%) also supported allowing more offshore oil and gas drilling as a way to address the nation’s energy

But on other energy policies – requiring better vehicle fuel efficiency, giving tax breaks for oil and gas exploration, increased federal funding for mass transit, or increased funding for alternative energy research – there were virtually no differences in the opinions of men and women.

In addition, men and women share similar views about global warming: In a survey last November, 65% of women and 60% of men said that there is solid evidence that the earth’s average temperature has been rising over the past few decades.

Women are somewhat less supportive of possible military action in Iran than are men. In February, 62% of men and 54% of women said it is more important to prevent Iran from developing nuclear weapons even if it means taking military action. Only about three-in-ten men (29%) and women (30%) said it was more important to avoid a military conflict, with Iran, if that means the country develops nuclear weapons.

When it comes to the U.S. military mission in Afghanistan, majorities of men (56%) and women (59%) favor removing the troops as soon as possible. That survey, conducted in early March before reports that a U.S. soldier allegedly murdered 17 Afghan 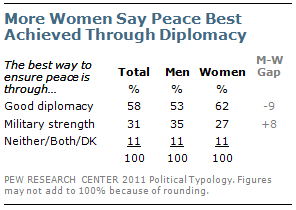 civilians, also found that men and women have similar views about the way things are going in Afghanistan.

More generally, in a survey conducted in March 2011, a higher percentage of men than women said that the best way to ensure peace is through military strength (35% vs. 27%). About half of men (53%) and 62% of women said peace is best ensured through diplomacy.