No Consensus on How Egypt Protests Will Affect U.S.

Americans do not have a clear point of view on how the massive anti-government protests in Egypt will affect the United States. More than half (58%) say the protests will not have much of an effect (36%), or offer no response or are noncommittal (22%). Of the minority that thinks the protests will have an effect on the U.S., nearly twice as many say their impact will be negative rather than positive (28% vs. 15%).

The latest national survey by the Pew Research Center for the People & the Press, conducted Feb. 2-7, 2011 among 1,385 adults, finds that nearly half (48%) say they have heard a lot about the anti-government protests in Egypt; about the same proportion (52%) report hearing little or nothing. 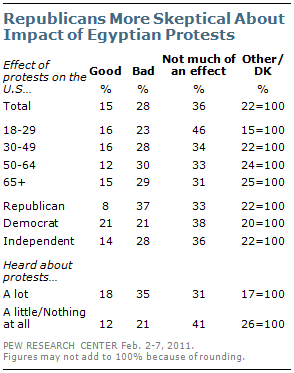